I had just begun a personal project triggered by the launch of the Mars 2020 rover, Perseverance, which I’d watched being built via NASA/JPL’s live stream from the clean room for many months. It was Dr Who back-of-the-sofa nail biting as will be the landing in February. The project has something of a home here, it seems to me, because, still in progress, it currently comprises gesso (acrylic), metallic acrylic washes, gritty pumice medium, and collaged strips of NASA landing and search survey images.  This is the first stage – sweeps of burnt sienna forming the crater, delta, and behind it the mountains from which the water is thought to have come. 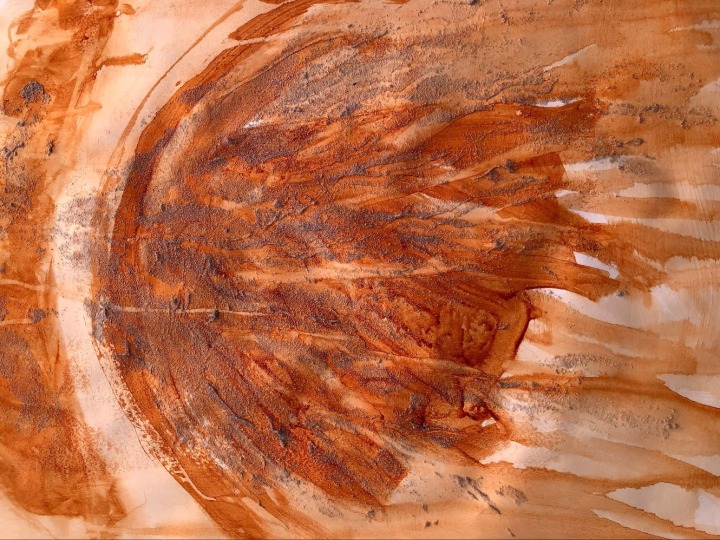 Next I added some metallic bronze, metallic gold, and alizarin crimson, making use of the pumice texture and orienting the support (A1 cartridge) to portrait to allow semi directed flow of dilute paint in rivulets through the painting. When it was dry, I pasted cut strips from three NASA images into place, at first roughly over the corresponding geography then later onto areas that by accident had very similar shapes or colours to parts of the painting itself. I had grouped these and numbered them 1-12, each group from the same part of the photographic composite but broke that sequence where a strip resonated with geography of the painting’s surface.

My plan is to take extracts from the subtitles of the NASA video describing the rover’s search area and to either paste these into the picture or to make a found poem of them. I was recently introduced to Filmora9, a video editing suite, by a fellow student and I’m finding it both versatile and easy to use so that in PoP I was able to make short films of pieces of work and to add sound tracks using my own recordings of water or birds – often slowed down. I have an idea to do that with this piece, adding the sound of the sea to reflect the proposal that water once existed on Mars in abundance, and maybe recording the poem to run underneath that.

5th August. Today I experimented with adding green acrylic to gloss varnish to make a wash that would tint the painting green and dry to a shiny finish. It shows up a little less well in the photo than in reality but that can possibly be corrected with a different easel angle and morning light. Tomorrow I will paste all the sections of the NASA video subtitles onto the bottom of the painting and consider what should be done next. In the meantime, the quick film is progressing with an ocean soundtrack in place and some effects derived from changing the opacity of the two image tracks. 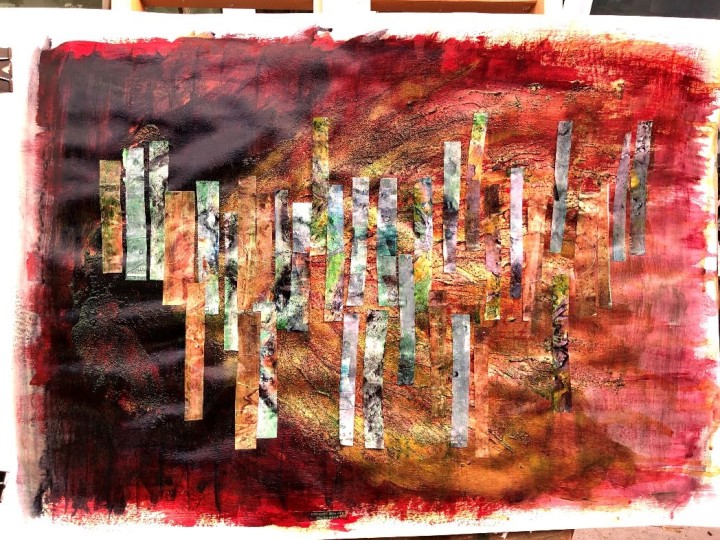 6th August. Today I cut out and assembled in rough order the subtitles from the NASA video. It’s a hot day and it was quite a trial running through the video to clip out each utterance then printing, cutting, and putting them in order. Somehow there were several replications and a few MIAs but eventually all, in particular some key words and phrases, were where I wanted them to be. I took extra prints of some snippets and cut them to reflect what so many people want to hear – that there was life on Mars.

I have pasted these in the subtitle channel, allowing them to spread towards the right of the painting, and placing some of the edited pieces in positions to which they roughly relate. Significant positioning includes the repeated phrase ‘It’s too cold and dry’ at the start and edited references to life on Mars [see above: ‘whether life ever existed on Mars’, this becomes ‘life existed on Mars’] to the right, the outer margin of the delta, suggesting forward travel. The varnish/green wash has buckled the paper but I find this appealing and reflective of the terrain. I want to bring that terrain forwards a little now, maybe with another layer of gold or copper acrylic, to add some tiny images of fish, and finally then to put the last image into my composite video in Filmora9. Then I had probably get on with the tasks of the actual module!

7th August. After thinking I may have lost this but investing in a newly developing confidence in my ability to effect a rescue, I washed the whole, including the new silver layers, with dilute Payne’s grey, used Fineliner to pick out and create detail in the collaged strips, and then made swirls with a nearly-dry brush in a further layer of PG wash. The whorls come from a technique I discovered when I was painting pebbles at the beginning of lockdown; a thin layer of dark colour over one of gold or bronze, swirling the brush around in circles or a serpentine motion makes patterns reminiscent of Celtic jewellery. In this painting, I’m using the patterns to represent both the dust devils that cross the barren surface today and the eddies that might have existed in a lake full of aquatic animals millions of years ago.

Jezero crater: the search for life on Mars.

Collage of NASA images of the landing site for the Perseverance rover in February 2021 on painted surface of metallic acrylics, pumice medium, and gloss varnish. Photos taken using iPhone 8, resized with image resizer for Windows 10, and imported to Filmora9 for addition of blending and fading effects. Video also taken using iPhone 8 and similarly processed. All incorporated images and audio are my own.

Earlier work relevant to this module: