Continuing from the previous post, these are from the second half of the book.

I found this really difficult because, to me there was nothing about the drawing to be copied that said ‘leaf’. Perhaps that’s the point – draw what you see, not what you expect to see. If so, it lost me because I couldn’t make out any clear lines, I found the folds confusing, and the shape more like a tortured bat or something gynaecological. Still, nothing ventured …

This was a little easier to make out but the leaves still seem less like leaves than the ones I’m familiar with. These sketches, the ones to be copied, are both by Aristides herself. ‘Leaf’ is dated 2017,  as is ‘Apples’, below. 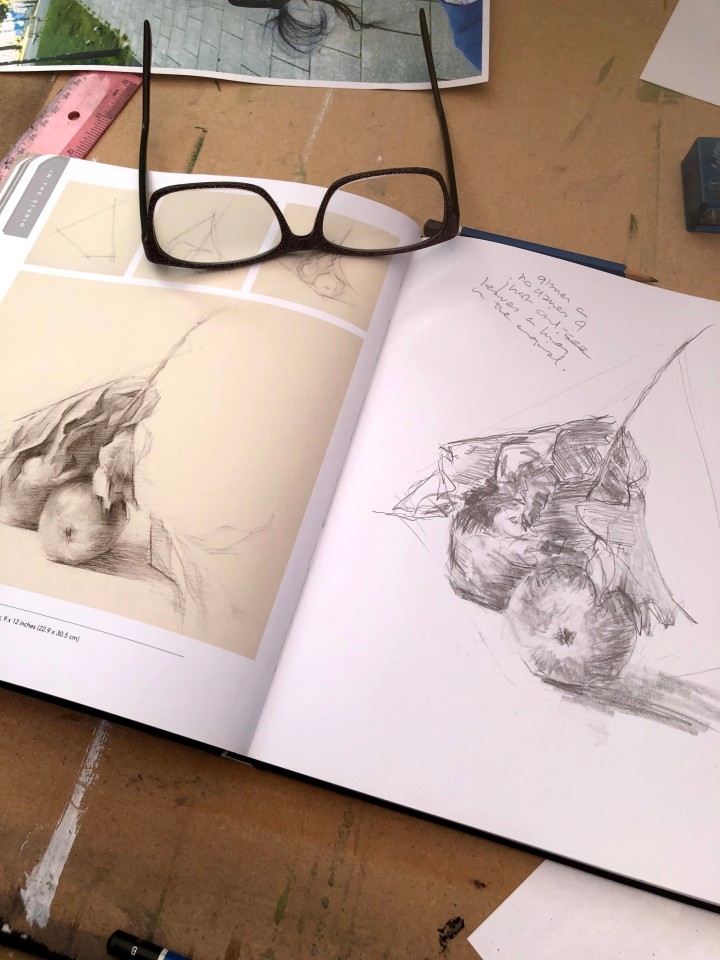 This is about boxing in notional space and assessing proportions. I’m not too good at that so I’m paying attention. In this instance, simply translating that space horizontally on the same page is not too demanding but it’s the principle I need to get into my head.

More blocking, notional space, and dimensions. The pineapple is on the facing page so that the last part was not too difficult. This time I found the drawing task itself more interesting as the original is clear. By James Marion Shuli, Ananas comosus (pineapple) 1919 has a botanical feel to it and is in fact housed in the US National Agricultural Library. My copy has a face which, now, I can also see in the original.

Moving onto tones (value), these exercises start with simple ‘colouring in’ of the blocked shapes to indicate tone. The original drawing, Pears on a Vine (2017) is by Melissa Messer who uses myriads of tiny hair-like lines whereas I prefer the flat side of a 7B pencil and some dabs with a putty rubber.

There is quite a lot of shading in this (the original is Still Life Demonstration by Paul Rosiak 2017) and again I’ve chosen to use my preferred style rather than the fine lines. It was quite a challenge, I notice now that the piece of fruit in the foreground looks as though a bite has been taken out of it which is not the case in the original. It may be wrong here but there’s a tip for the future should I need a half eaten apple – that sharp leading edge and the graduated shade within that suggests a cavity. 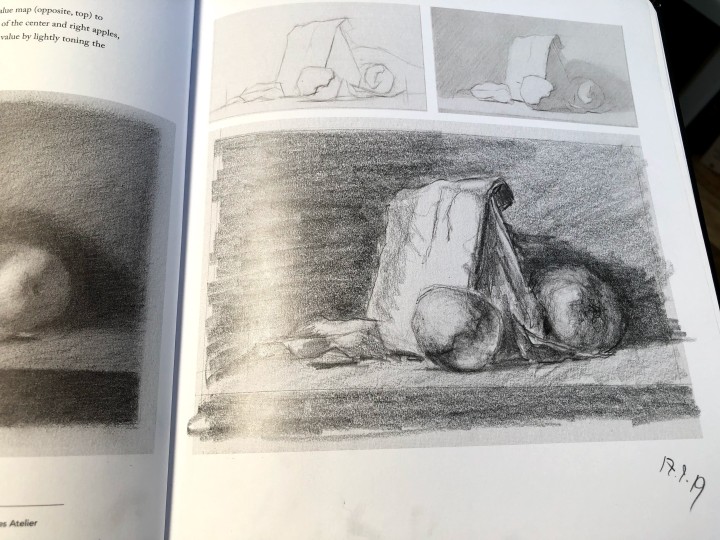 My bete noir – a teapot. Anything with a handle and a spout actually. This lent itself to blurring of edges and inaccurate as it may be, it’s quite a triumph for me just to make a pot with passable symmetry and balance. The original by Paul Rosiak is Study of a Teapot, 2017. 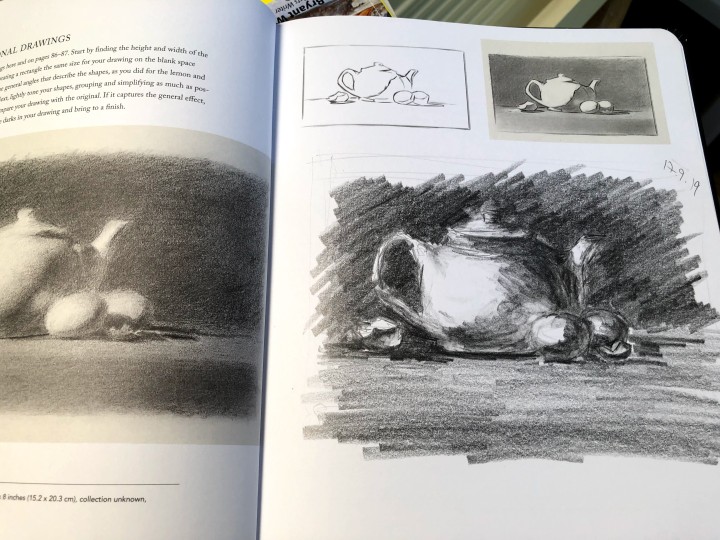 The next task is a very fuzzy-looking landscape; blurry, uninteresting, dull of tone, and comprising large areas of ill-defined shapes. Even if I reproduced it accurately, it wouldn’t be a drawing I would feel merited much interest. I may give it a miss.

That concludes Chapter Five and so also this post. There are two more chapters; form and portraits; both of which look interesting and challenging. I’ll post my efforts in due course.