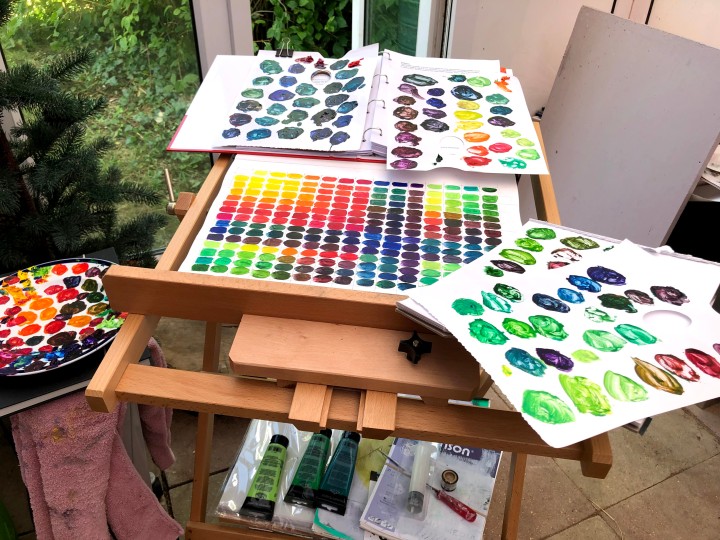 Sometimes you just have to go back to basics. I’d skimmed over the paint mixing exercise, not quite seeing the point, then for all sorts of reasons I decided to revisit the early pages of the course materials. There on almost the first page was a grid of mixed colours – extensive, careful, neat; I very nearly turned the page.

But after a bit of thought it seemed to me that this was the kind of thing I needed to be tackling. It’s not an identified exercise but I thought it would probably help when I moved onto the one that is and that I’d skimmed. I got out all my regular paints and put them in order; marshalled a palette (then discovered I needed more than one), and made a grid in my A3 sketchbook to accommodate the fourteen across and fourteen down mixes. 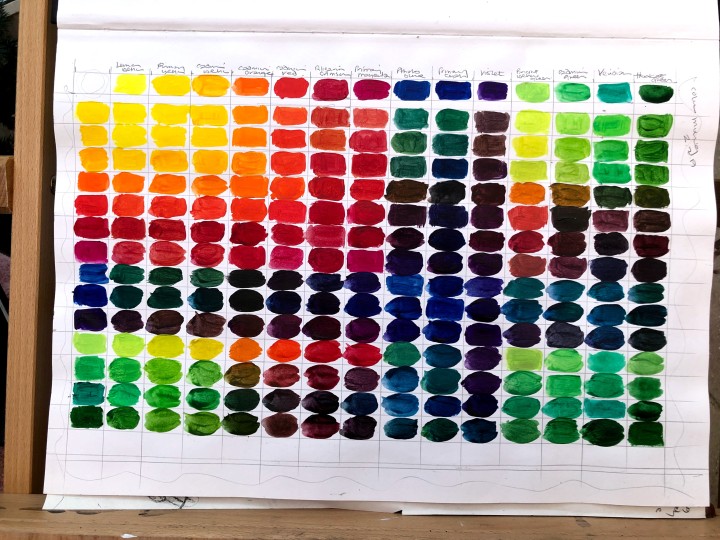 It took two days, on and off, but I’m exultant at the result, and not just because I actually filled in all the boxes but because I know I gained from it.

At a pragmatic level, there’s a skill to setting out a mixing palette for something of this scale and I ended up with five – four sheets and a plate – in an attempt to keep source colours clean enough to use for as many mixes as possible and to use the minimum amount of paint necessary. I didn’t quite achieve this but I see there’s a benefit in having one palette with strings of source colours from which dabs can be taken without contaminating the whole, and others for mixing.

Then, as I worked through the task I found that ‘taking more water with it’ led to quite different presentations of the resultant mixes. My brushwork was more fluid and less rigidly rectangular and transparencies appeared at the edges. These may seem simple revelations but to me, a knife-painter accustomed to piling medium onto a board and carving it, often without mixing at all, it’s shown me how many variations and subtleties of shade and tone and texture can be achieved. No need to buy pre-mixed colours when they’re waiting to emerge with a bit of planning.

I’m sure if I tracked the grid for equivalent patches, they wouldn’t be identical but this isn’t a Dulux colour chart, it’s a possibilities chart and a way of seeing how much more versatile a medium can be. Incredibly worthwhile.