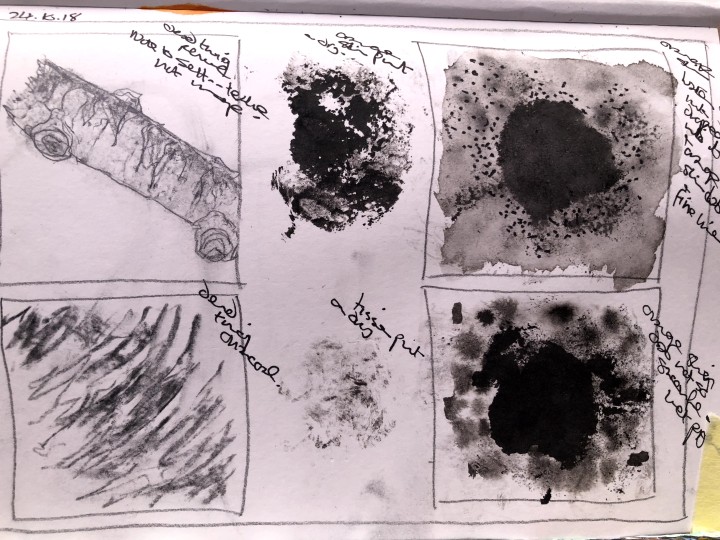 I spent quite a long time figuring out what was required here – draw textures, rub textured items with a pencil, stick things onto the page and work with those? I did the dumb thing and drew the dead twig I’ve had in a pot for months.

But it wasn’t about drawing, as such, was it? It was about making textures from textured things and experimenting with media and ways of subverting those to serve the image. I think.

Top left is the neglected bit of door-frame, scratched and chewed by one of my dogs. I tried charcoal first but, although that created some texture of its own, it wasn’t the one in the wood. The lines go both ways – wood grain vertically, dog chew horizontally, so I used a fine liner to make the wood grain marks. Not a huge success, really.

Top right is thick, black, watercolour paint straight from the tube aimed at making an image close to the black polyester bag I use for pencils on the move. That bag seems to reflect very little, like a black hole it pulls in the light and doesn’t let much go. There’s some shine though and I thought dragging the almost-dry brush over the page might make the right sort of impression. Not sure, but I like the thick paint.

Bottom left is a patch of pumice medium pretending to be grit. I dropped ink on it to see if I could replicate the pinpoints of coloured light the grains give off but it does look more like grubby porridge! I like bottom right better – that’s a bit of leaf litter glued onto the page and inked orange for autumn leaves. I’m not sure it’s in compliance with the task but it was fun.

And this here is frottage. It’s like brass rubbing without the brass and not at all a suspect activity best kept private. I used a 6B pencil on this A1 sheet with a variety of ‘brasses’ underneath. The drainer worked best despite being an odd shape. The distortions remind me of the ones caused by the near-total eclipse a few years ago when we all went out with sieves to see for ourselves how weird the cosmos can get. The bristled surface of a scrubbing brush was also interesting – particularly in that something came of it, which I hadn’t expected. The oven glove was less cooperative; also the orange peel although it did give up a bit of its texture. These make an interesting library of images for future reference. There are detail images below. 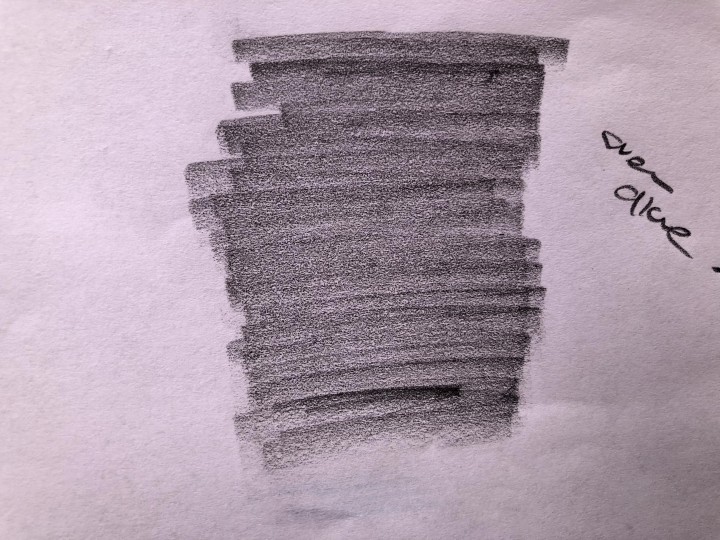 These were more successful than they deserved to be as I had two sheets of paper instead of one. Even the basket I tried to take a stamp from by wrapping the paper round it produced something interesting. More like lumpy porridge, perhaps, but there are some nice rounded shapes and some drifts of changed pressure due to the clints and grykes of it.

Texture from streaking and smudging.

I rather enjoyed this part of the exercise; amazing what happens to old eyeshadow if you smudge it then stripe a wet Derwent watercolour pencil down it (top right). Top left is another Derwent pencil, this time with droplets of water on the surface. I wanted to see how that looked before it dried and after. Wet is interesting in its distortion and magnification of the marks below it, and look at the light there, how it trickles along the edges of the meniscus and balances the shadows at the intersection between fluid and solid. How To Paint Water – Example One.

Bottom left is the intricately tangled surface of a pan scrub brush. These don’t rust but the old brillo-types did and it was the idea of rust that prompted the orange ink. There’s something organic about that – like looking at something like pond weed under a microscope but that’s capable of independent motion. On the right is that patch of pumice medium. I don’t think that idea has been as successful as I’d have liked. I need to look at some actual grit and try again.

Close up details below. 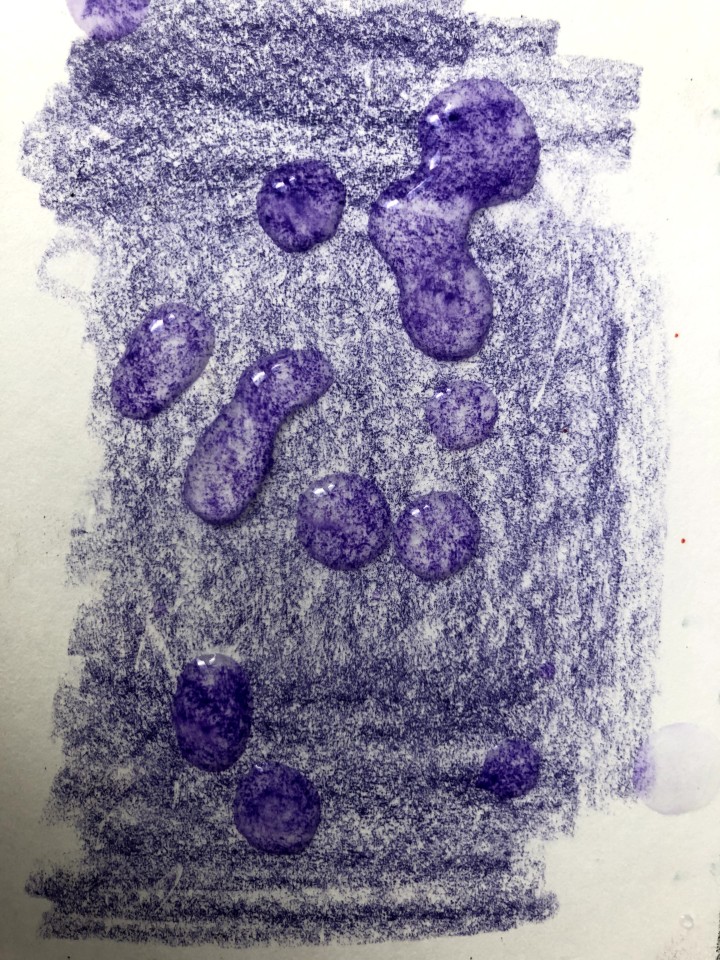 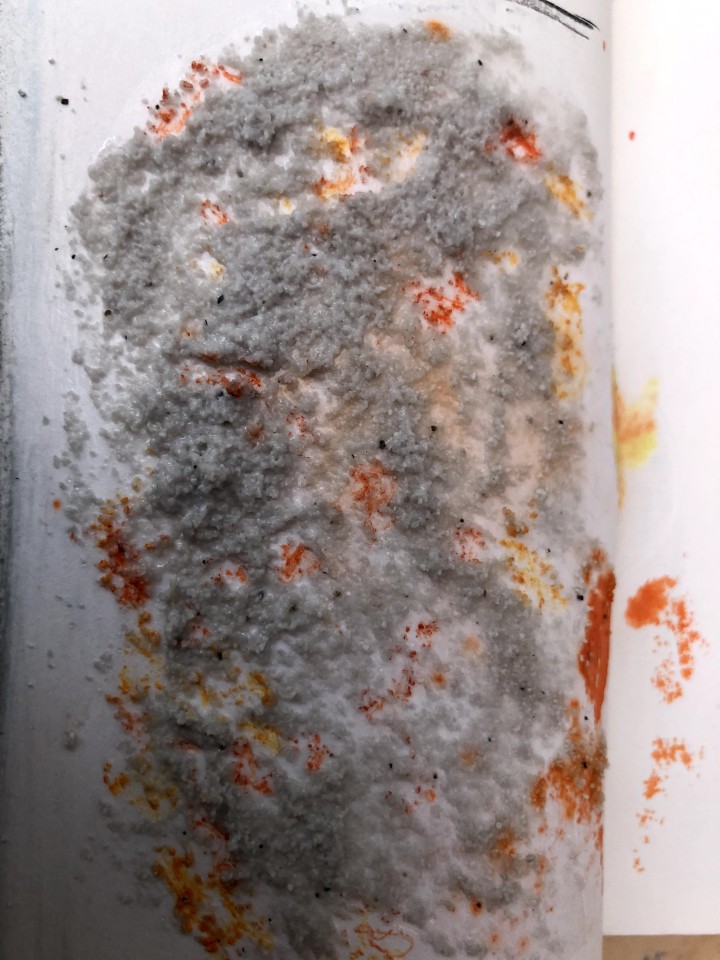 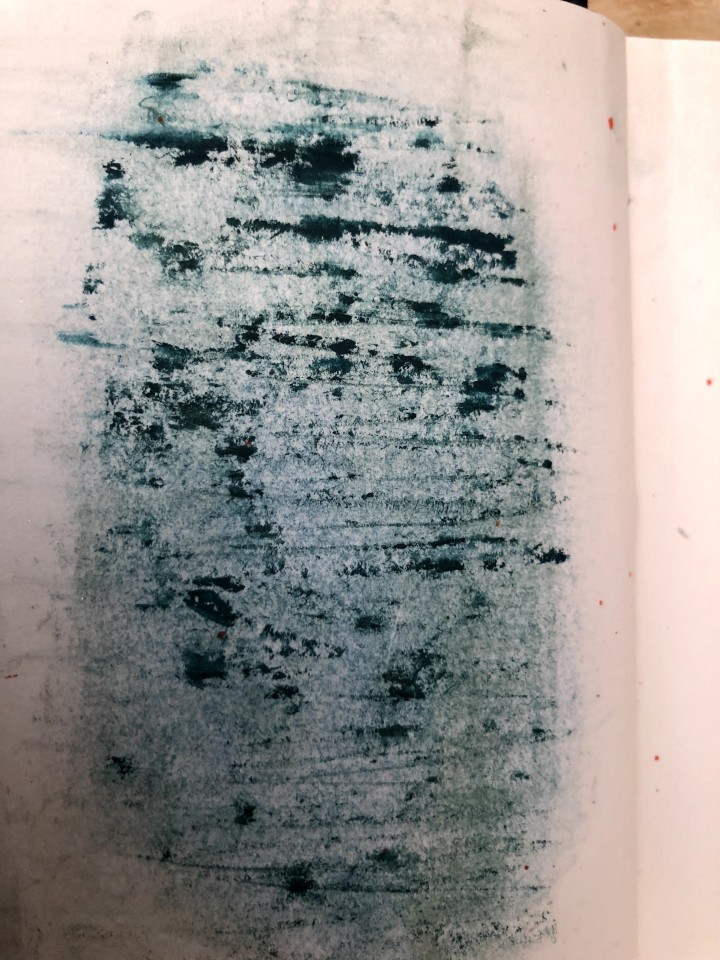