There isn’t an explicit task to this other than to take a look at various kinds of landscapes from the surrealist oddities of Dali, Ernst, and de Chirico; the less dream-like but emotional and somewhat personal work of Nash and Sutherland; and to take another tilt at German Expressionism and Symbolism via Nolde, Klimt, Moreau, Bakst, and Kahlo.

One of the first genres of painting to attract my somewhat sci-fi focused attention was surrealism. It looked out of this world, an imaginarium of weirdness that seemed aspirational. It’s hard to put my finger on it, but I think Dali’s 1931 Persistence of Memory might have been the gateway image to the rest of the madness. I have a clock, it ticks and the hands move but it keeps to a time unrelated to reality. 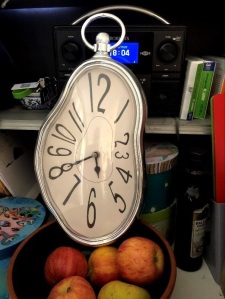 Another image burned into my brain from that time is the man in the bowler hat with an apple for a face. I didn’t understand it – does anyone? – but I thought it was exciting and perverse and likely to cause deep consternation among the generation I was beginning to differentiate myself from. ‘The Son of Man’, (1964), is clearly not a landscape but look at the rendering of the wall behind, the soft focus of the sea, and the almost threatening clouds above. This city gent isn’t dressed for what may be coming and I wonder if the landscape (seascape) is the context by which to read the figure.

I thought I hadn’t heard of Georgio de Chirico, and in truth I hadn’t because, looking now at images of his paintings, I’m quite sure I have attributed these to Dali. They are much more architectural – a draughtsman’s approach to painting – and with stronger colours and sharper shadows.

Max Ernst, on the other hand, I would have claimed to know but none of them ring any bells and I think I would have recalled these nightmares. I read that many surrealists were rather seduced by the new so-called science of psychoanalysis so it seems likely to me that much of their material is an interpretation of what they saw as their or the (collective) unconscious.

Paul Nash was both a surrealist and a war artist which must have generated some disturbing imagery. Totes Meer (Dead Sea), which shows a ‘sea’ of destroyed German planes, would seem to represent a collision of those two streams.

I thought I recognised Graham Sutherland – his design for the tapestry at Coventry cathedral impinged even on my mind in the early 60s but I have no idea why. I hadn’t known he was also a war artist and I wonder what it took to be in that kind of environment in such a role. I think I heard they had no weapons but that the units they were attached to valued them for their honest portrays of the horror and the mess of it all. Totes Meer is stark and according to one account, Sutherland very much wanted the Germans to see it but this seems not to have happened. This example (below) I think gives hints of that illustrative bent and reminds me a little of William Blake.

Emil Nolde was a German Expressionist and so much of his work that I could find via google images is consistent with that rather heavy handed but wild colourful style. His seascapes are remarkable and seem almost digital in their fluidity.

Gustav Klimt is the man I though was painting gold in some magical way before discovering he was using gold leaf to which he most likely had access as his father was a gold engraver. I hadn’t thought of him as a landscape artist particularly, just a creator of exotic images that seemed like stained glass windows – flat and with edges around the patches of colour. This, Avenue of Schloss Kammer Park 1912, gives the lie to that view, although this is still quite edged and illustrative. 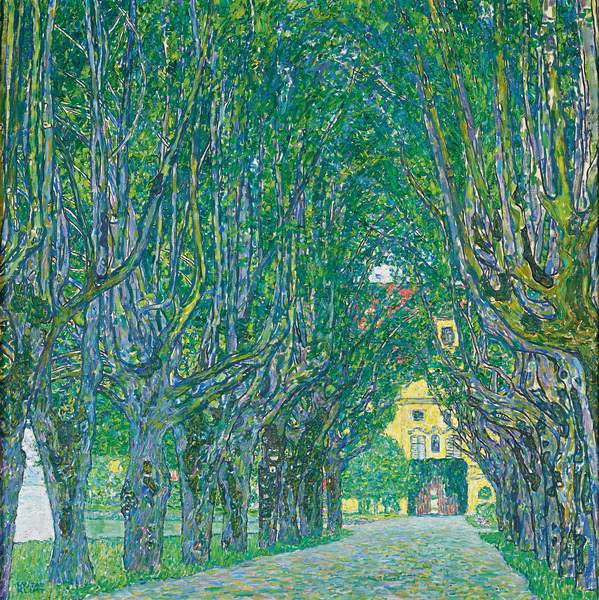 I had never heard of Gustave Moreau and, discovering that much of his work had a deeply religious theme or was fantastical, that is probably why. Bridgeman has just one image that could be loosely described as landscape and the focus of that is mermaids.

Frida Kahlo is a different matter altogether, in my mind. Wherever she appears in her own paintings, there is fierce defiance and a real sense that she is not to be messed with. Her life was difficult, much of it physically challenging, but she was not one to give up, and her work is colourful and emphatic. I don’t know the story behind it but this, Self Portrait on the Borderline between Mexico and the United States (1932), would be one to chill the soul of any US governmental personage who might think to challenge her. Look how she represents herself – pretty in pink, demure, like a US housewife – while behind her is a picture of pollution, industrialisation, machines over nature. What is she saying, I wonder? Whatever it is, it will be an earful.

All images found via Bridgeman Education and additional information by simple google searches.