This task requires a review of previous work to consider the mood they may have conveyed, and then either a new painting focusing on mood, or a re-work of an earlier one.

The original and my subversion of it are both quite traditional in that they convey a picture with figures and a landscape. They’re also relatively serene despite the deep reds in the sky and sea, and the very dark foreground tones. Mine is going to be about fragmentation of that serenity.

While no one would describe our current situation as peaceful, there has been a certain stability to it with clear rules about social behaviour and a new normal for all of our relationships. Since earlier this week and particularly the last couple of days, though, this has begun to unravel due to lack of clarity from government – Stay Alert being nowhere near as clear as Stay at Home – and then news of a breach by the very architect of the stay home rules and a subsequent stream of party backers. The result has been the cut-off-nose-to-spite-face response by many that, if he could do it then so could they. Presumably they’ve forgotten that it’s a virus we’re trying to get one over on, not a school prefect.

So in response to this, and glancing at the disposable palette I used to make it, I prepared an A1 sheet of cartridge with white gesso, pva glue, and pumice medium applied with a pebble, then ripped up the palette (freezer paper) and stuck it onto the support. Some of the paint was still workable and the brush I used to push it into the medium/glue also tracked colour across the areas in between. I don’t have a plan, but then that would seem consistent with several key individuals; this will evolve but it will reflect the original. The current image is just the base layer. 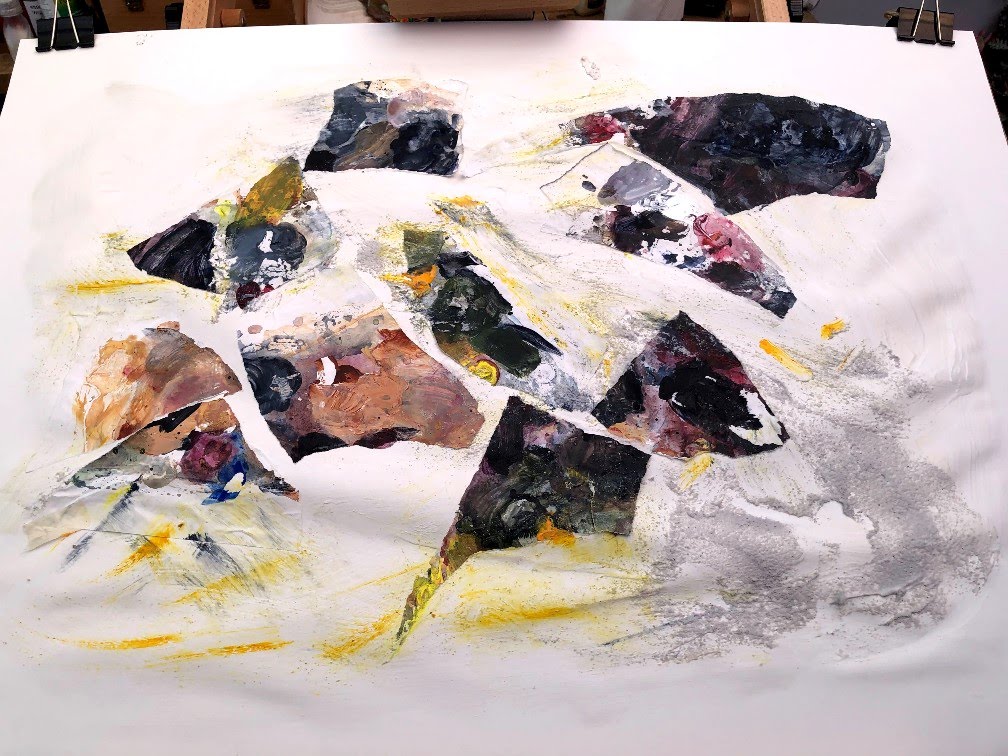 This is day two and I have been prowling round my base layer, looking to see where next. I need to bring in the two iconic elements of the original – the men/sanitiser shapes – and to give the whole more of an identity. I decided that, having cut up and used the freezer paper from the palette, I might also cut up the film I use to over it to stop the paint drying so quickly. This is A3 film used in overhead projectors and, of course, if you lay it across wet paint, some of that sticks to it.

I cut up strips and shard-shaped pieces mostly with a view to placing them where they would emphasise a diagonal fracture top right to bottom left (I wonder if a right hander would have made that left to right?) and also resonate with or compliment the palette fragments beneath. I used PVA glue to stick them on and also to glaze the existing surface so that I could add paint.

The image below shows how this has developed, with paint adding substance to some of the gaps and leaking over or down into levels below, and the shapes of the men brought out in bright red to emphasise their dislocation. As there are some sharp lines made by the fragments of OHP film, I’m thinking I need to add sharp outlines to the red figures. Then I’ll think about whether to do more or exercise discernment and stop.

Do there need to be ‘edges’ here? Maybe not, maybe it has its own aesthetic and relevance in the simultaneity of chaos and containment.

How random was my placement of the pieces? Probably not at all, given most people’s poor capacity for randomisation generally. So how about unconscious influence? This is more likely in that I was really focusing on fracture and fragmentation, although that could have led to the more conscious choices. I am clear that I thought about it, but also clear that I let some things happen and given that I have many of my more successful moments by accident, what works may be serendipity rather than my clever unconscious doing its thing. I’m hoping this will prove to be a cumulative facility to the point when I can make explicit choices, knowing what the effect might be.

Here we go then, the last iteration before I start doodling curly black pen marks into all the spaces. There’s more definition to the figures; I’ve obliterated two of the heads that didn’t work; added some ‘flowers’ to the foreground bottom right by tucking blobs of paint into what was a pocket formed by OHP film that had not fully adhered to the support and squashing them; and I’ve emphasised the central diagonal with another red/payne’s grey wash. For once, this looks better to me in reality than it does on screen but below are some details that show a bit more of the payers, and those seem ok to me.

This image is taken from the side to show as far as is possible a little of the physical layering. I think the strips and some of the larger pieces show up here, also the pumice medium down at the bottom. 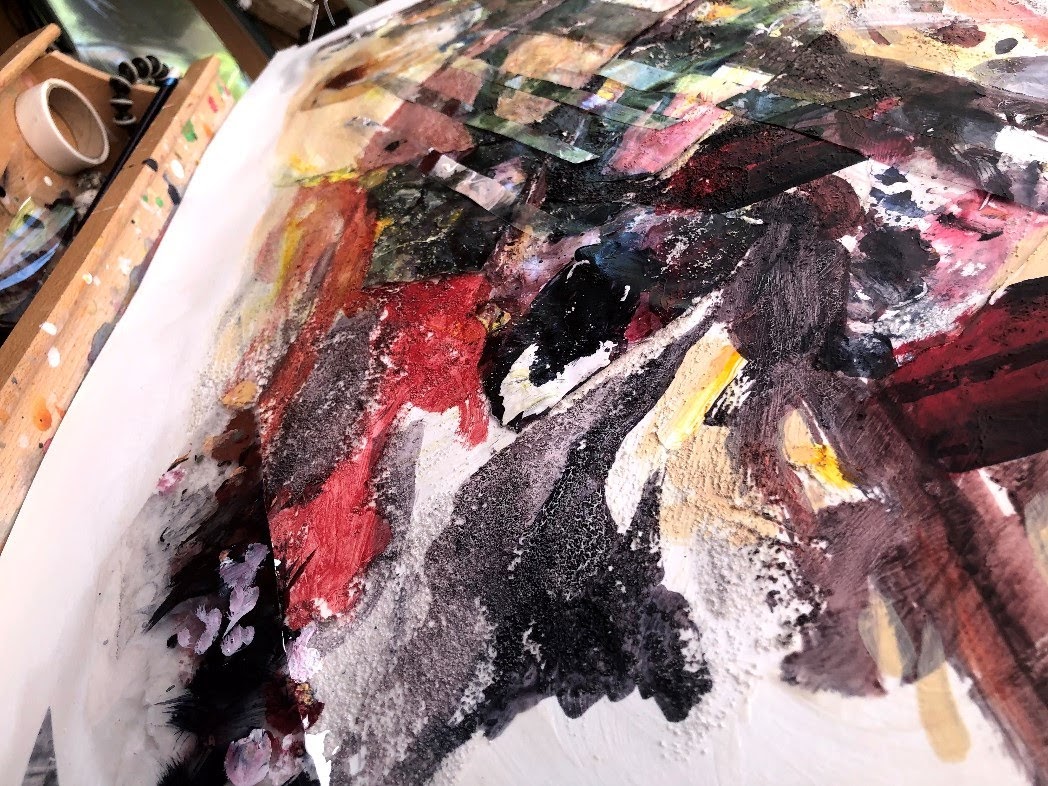 So is this a painting? I believe so. The media are paint, gesso, PVA, and pumice. Some of the paint is derived from the previous more traditional painting via the palette I used for mixing, and some from the OHP film I used to cover that palette to stop it drying out. If these are not ‘painted’ as such, then they are supports used inventively. It could perhaps be a collage but would that not require elements to be imported from beyond this immediate context? These are not, if anything they are recycled from a previous iteration.

I do think it fulfils the requirement to convey a mood. Chaos trapped and fragmenting our old reality as we are trapped by a microorganism, our familiar structures fragmenting as we try to build new ones. Flour is the new toilet roll shortage, delivery slots the new gig tickets, and internationally COVID is colliding with populism in ever more alarming ways. We will get through this. Wash your hands, keep your distance, and don’t be a Cummings.

Learning outcomes 1, 2, and 4: I think I have shown an inventive way of addressing the task and making shapes with a range of used and recycled materials. Reflection is an important part of my contemporaneous narrative.