Project 4 is about interiors and this task requires an investigation into the way the Dutch genre painters, as they were called, achieved their sense of realism, space, and the occupants in the room.

Johannes Vermeer (1632-1675) was one of these and happens to be one of my favourite artists because of the warmth he brings out in his portrait models. His interiors, though, impress as well; their domesticity and mundane but beautifully intimate and gentle compositions where so often the key character is shown in light from a high window.

This one, The Milkmaid c 1658-60 (left), for me exemplifies that gentility and the dignity he confers on his models. And this, Woman Reading a Letter c 1662-63 (right), illustrates the way in which such ordinary and private activities can become icons of a way of life. 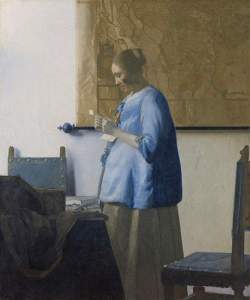 We’re asked to consider the ways in which these artists created a sense of space and drew the viewer into the room, and for me, Vermeer does this by the way he positions his models in relation to the light so that there’s a bright, white, area that either gives them a clear silhouette, or casts its own reflection onto them. He also seems to use grounding lines such as the bottom of the wall (in the Milkmaid picture) or the pole on the drop of the wall hanging in the second picture. Perspective is a particular draw in the first picture – the window sill, the table, and the verticality of the corner area. These make the space in which his model stands. It seems to me though, that it’s light that makes the space in the other image; it’s almost the first thing I see and it falls diagonally onto the woman reading her letter, giving her shape and volume against that stark horizontal pole. I think what attracts me primarily to Vermeer’s work is how unselfconscious his models seem, how relaxed and un-posed, and above all how totally unsexualised they are, something that feels relatively unique in the artist/model relationship over the years.

These, by Jan Steen (1626-1679), in contrast seemed posed and artificial – a snapshot before snapshots were possible rather than a point in a fluid movement. The sense of space here seems to come from deploying various elements of the painting at foreground, middleground and background positions to indicate depth. The woman looking through the door in Tric-Trac Players (1667) on the left, and the small gate opening out into the garden in Peasant Family at Meal Time (1665). In both pictures, there is a diagonal going bottom left to top right tracking through the action in the centre. I find Steen’s approach less appealing than Vermeer’s and this was the most appealing of the ones I looked at for this exercise. I think Vermeer may have spoiled me for other artists of his kind.

The next part of the task is to look at ‘various artists from different periods’ to see how illusions of space are created, and the use of doorways and furniture within the composition. As this has the potential to take in a vast time scale, I decided to take my samples from points somewhat earlier and considerably later than the Dutch era.

This proved less easy than I’d imagined as so many of the earlier works were religious and much less about the interiors than the halos, whereas the later ones, Van Gogh apart and I’d hoped to avoid the obvious, became somewhat abstract. Nevertheless, I found some that seemed appropriate to the task.

This is a detail from Las Meninas (The Maids of Honour) by Diego Velasquez (1656) via Bridgeman Edu (accessed 04/03/2020), which not only shows the artist himself in the far left but places the young girls in the centre of the frame, including a person of restricted growth over to the right. In the mirror is the reflection of King Philip and his wife Mariana, and at the back is the Queen’s chamberlain. For so many reasons this painting is unusual; the artist included, the young woman – the ‘court dwarf’ – there with the Infanta, the relegation of the monarch to a reflection and therefore in the same place as the viewer so that we are standing alongside. The sense of space, unusually I think, comes from the massive canvas on the left (not shown in full in this image), which suggests height against the children in the centre. The foreground otherwise is small – a dog – then expands in the middle ground to this line up of key characters, in the centre of which is an open door flooded with light and an almost silhouetted figure which draws the eye up into the back of the painting. At this point, there in the darker areas is the vertical taking us into the high ceiling then across and back down to the canvas. I remember a documentary in which this painting was discussed but I can’t recall the name or date and so my back up reference is Stephen Farthing’s Art: the whole story which carries some of the same details. 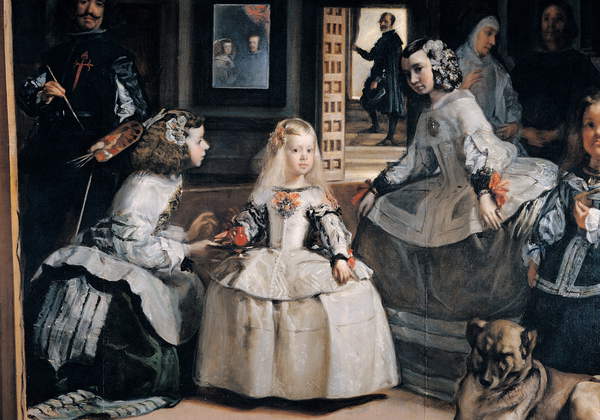 My next find is an absolute monster by Giovanni Paulo Panini, Interior of an imaginary picture gallery with views of ancient Rome, (1756-57). An example of what was called the Grand Tour Artists (Farthing, 2018 p 256), this must be the interior to end all interiors. The detail is extraordinary and seems designed to impress with its scale rather than to exist as an art work per se. The perspective is very slightly angular, moving from a kind of south south west to north north east in the lower quarter of the frame. That should put it on the human scale but it doesn’t because everything depicted is small and slightly lower than the line of sight – we’re a little above this scene and so far back I doubt many of us could, in reality, see all this detail. And I’ve just noticed that, again, at the lower focal point there is a doorway to an outside area and it has a person leaning in it. Is this a common device, I wonder, a language that says ‘look how far away this door is’ and emphasises the point with a size-consistent element in case we have no idea whether that door is large or small? I can’t say I like it much as a painting but I’m impressed at the detail and the fact that Panini seems to have managed this in just a year.

Finally, I came across Otto Dix’s Metropolis (1928), a tryptic of different interiors showing, according to Farthing, the social divisions within Weimar society about which I know very little but which involved many positive changes to pay and benefits but that also relegated women to ‘traditional’ roles in order to accomodate returning soldiers (BBC Bitesize (GCSE) The Weimar Republic 1918-1929). What strikes me about this is the way perspective has become a more primitive thing, implied by the relative size of figures in the scene rather than by the kind of attention any of the previous artists would have applied to it. These interiors are backdrops for the real players, the characters representing Dix’s perceptions of the social upheaval of the time.