This was the piece I’d been developing – A1, grand vision, waves and whales in ice cold blues. I liked it. I also liked the crops I’d used to help focus the energy of it and I’d put those into a cycle of display on my Echo Show devices which meant I would come upon them unexpectedly and at a once-removed distance. That, like making a pdf of a short story and reading it on your kindle instead of the paper you printed it out on, lends another eye or ear to the material. It’s not quite mine in this new environment and so it’s easier to see the flaws.

One afternoon, this crop cycled by and sat on the screen while Amazon cycled its headlines over the top. One of them read ‘Ocean warming’ suddenly I had a new image. 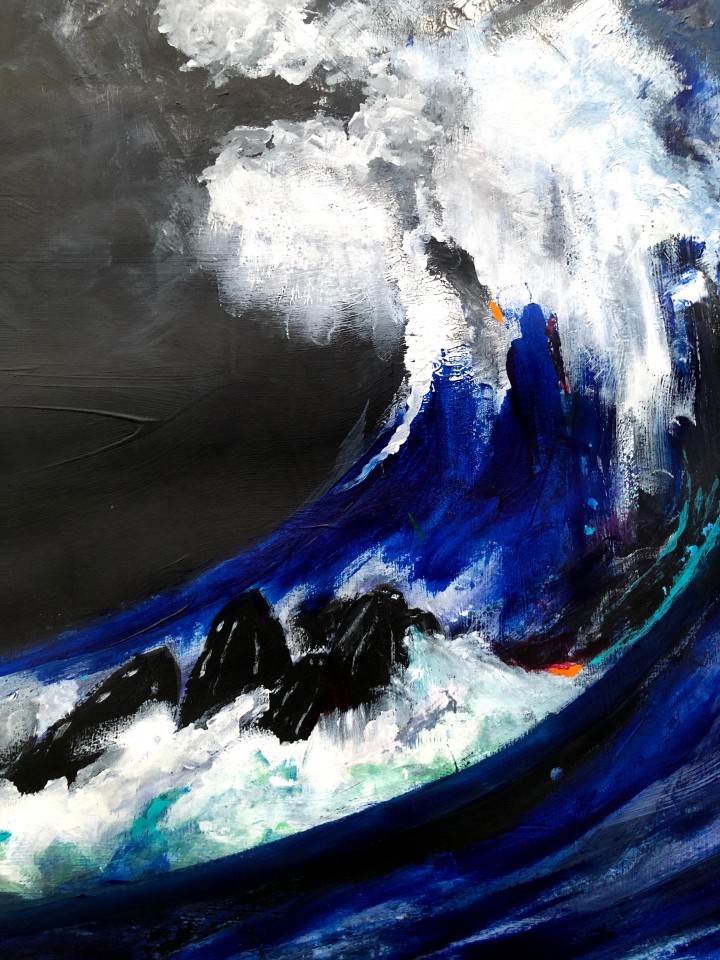 Not blue now, but red. Fiery like the burning forests of Australia, flowing like the lava of an erupting volcano, hotter than the north Atlantic ever should be.

I tried out some ideas in Rebelle3, a digital art programme that allows importing of images and layering so that new colours can be applied over the old, and it seemed to work. The challenge then was to make this in reality using actual paints and brushes, not ones operated from a graphics pad. I didn’t have much time either and this would need to dry before it could be sent. If it worked out.

This is it. Cropped from the A3 hot pressed watercolour sheet prepared with black (left) and white (right) gesso, it is made with gouache and acrylics using various brushes and a real world digit for blending. I’m calling it Ocean Warning. Is it safe? Probably not. But then safety is only a thing in cars and rockets, fridges and dishwashers isn’t it? It’s surely not a thing in art.