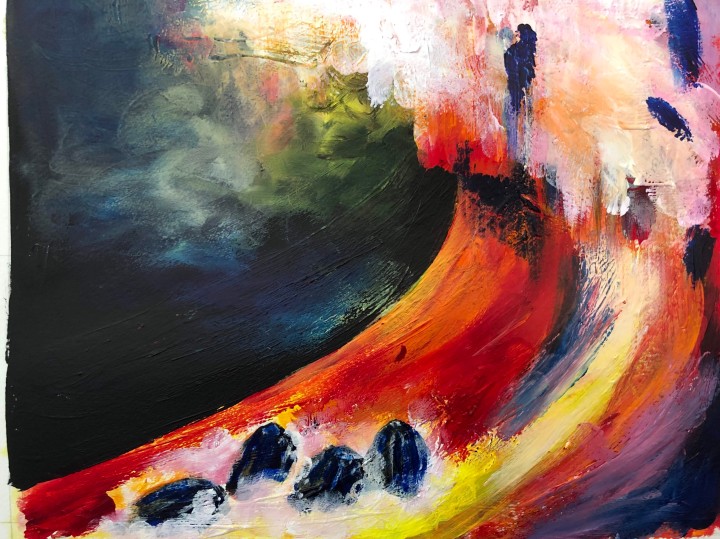 I found four paintings by different artists using different styles and made sketches of these in soft pastels, the originals being oils, acrylics, and woodblock print. I translated these, adhering to a differentiating extent to the key approaches used by the four artists: stylised and linear (Hokusai’s The Great Wave [~1829]), blended (Turner’s Fishermen upon a Lee shore in Squally Weather [1802] ), naïve and almost abstract (Klee’s Golden Fish [1925]), and gesturally expressive (Hambling’s Bold Breaking waves series [~2012]). I began then to consider texts that might be relevant to each one and to look at typographic art, some of which I’d seen in a gallery in Brighton earlier. I was drawn back, though, to a poem I’d read by Marianne Moore called The Steeple jack (~1930) in which she writes, “Durer would have found a reason for living in a town like this … with eight stranded whales to look at.” I could not reconcile this with the art work I had chosen and nor could I see how I could use text in the very sophisticated way I had observed, a graphic rather than a drawing/painterly skill set.

As a result, I found myself deviating from my original plan and went on to work on sketches applying the different styles to reference photographs driven by sea scenes and whales. These I eventually amalgamated into one A1 image in which the four styles were represented in different areas. Finally, after a number of iterations at A1 size and some experiments at A2 portrait format, I developed the submission piece (A1 landscape) as a coherent whole but with small details that, for me, acknowledge the less foregrounded styles. As part of the process of composing the eventual image, I used the Fibonacci spiral to find the ‘golden ratio’ focal point then, using cut-outs from elements of earlier large scale sketches that I had printed out, found the placements and spaces I wanted.

The penultimate piece comprises images based on photographs of an exemplar of a huge wave in the north Atlantic, and whales surfacing to feed. The whole owes its expressiveness to Hambling’s energetic style, blended areas of foam to Turner, and some details in both the sweep of the wave and the foam to Klee and Hokusai. The large expanse of black gesso is unadulterated beyond a detail of dark red wash and is, for me, a triumph of leaving things alone instead of filling them up. Gesso is both textured and reflective so its surface changes depending on lighting and angle of view. For me, this seems to indicate that it is not a neglected unfinished space but one with its own dark movement and content.

The final piece came about as the result of a headline about ‘ocean warming’ which brought up for me a vivid image of one of my crops from this piece in flaming reds and oranges. I imported this crop into painting software (Rebelle3) to experiment with layers of colour and then to Flamepainter for iPad to add the chaotic sparks and flashes that software is able to generate. The result was startling and led me then to make the physical version which I found more exciting as an image and as a concept than my original.

Quality of outcome – content, application of knowledge, presentation of work in a coherent manner, discernment, conceptualisation of thoughts, communication of ideas.

This task permitted the use of any medium on any support of any size and I think it’s telling that, despite developing a fondness for soft pastels, I chose acrylics which would permit the large scale (A1) gestural marks I felt at least parts of the eventual piece merited. I wanted the height of the wave to be emphatic and the several iterations of the piece, including two I portrait orientation, were often about the position and relative size of the whales such that they would emphasise the scale by complementing each other. People know how big whales are and so if these were recognisable as such, the size of the wave is inescapable.

I have shown the evolution of the final piece in my contemporaneous blog posts where each image and associated discussion appears as a developmental stream, moving from the initial direct copying through the application of the individual styles to reference images and then to the eventual amalgamation of elements and blurring of styles. This was unplanned but grew, I believe, out of experimentation and productive extension of the principles of homage and progression.

I really valued the copying process and I want to do more as it made me zoom in mentally to the techniques of the individual artists and what made them different. But I was also anxious not to attempt replication, not just because I lack the skills but because I am not those artists and developing my own voice is important. Amalgamation led to some backgrounding of the styles drawn from Hokusai and Klee as these did not sit well with the other two which I found could merge along their edges and in pockets within each other. In essence though, the piece travels right to left from Hambling-esque to Turner-esque with dots of reference to Klee and Hokusai within that broad area.

There are parts I like more than others; the leading edge of the wave for instance, and the turbulence around the whales. I cropped these and put them in a folder accessed by my Echo Show devices which is a method I use to distance myself from a piece of work and see it as nearly as possible the way someone else might, and they still please me. I am less sure of some of the other parts, including the expanse of sea/sky on the left although I think that serves to balance the energy of the rest. An intriguing observation is that I felt very present in this image; cold and small in the freezing environment I was trying to make. Is that the voice I’m trying to find? Being there in the image as I am when I write? Perhaps it’s an essential, and hopefully I will develop in time the skills and techniques to begin to do that justice.

Ultimately though, it was an unexpected flash of imagery that resulted in the submitted image, an almost complementary colour scheme and concept rooted in a fully documented process.

I am not sure what to say here beyond the shock of finding copying the styles of four different artists using different media, different supports, and most likely a different dominant hand something I could do sufficiently well to feel I had accomplished something important in learning how art works. This was a revelation and I intend to do more of what I’m seeing as ‘copies+’ – someone else’s design, my interpretation or slant. I am beginning to understand a little of the debate about representation and what second order art work might be via the materials for UVC (2016) which I dropped as a qualifying course but still have available to read. But I’m not sure what term might apply to the use of an original representation re-presented in a different style.

My research I would define as exploration of different media – inks, soft pastels, acrylics, pen and brush, and devices to scratch at a surface to allow layers beneath to show or to give ink a channel into which to accumulate. I also went back to my original idea of four small pieces in different styles, illustrating a stanza from The Steeplejack, and made a series of drawings in inks and pastels on a piece of A3 watercolour paper, incorporating the text itself. Researching typographic art, I saw how sophisticated and graphics-driven it appeared to be, the lettering inventive and tailored but very precise so as to be clearly the vehicle for the image. What I produced is a essentially a prototype, an idea that requires its own process to develop for which I am not at all equipped.

The final piece has no evident techniques to point to but, I think, draws on all of the ones I examined and it is this preparatory work that allowed expression of the idea underlying the change of support size and palette.

https://mymodernmet.com/what-is-typography-definition/ This was the first set of examples of typography art I found and the quality is such that I realised I would be unable to produce anything remotely satisfying. Site accessed 17/01/2020.

https://www.pinterest.co.uk/heart58/typographic-artwork/ This is an annotated Pinterest collection with a wide variety of types, styles, and artists. Site accessed 17/01/2020.

NB I may edit this post prior to submission, but will not do so subsequently.