The brief is to build on a project from an earlier part of the course while being guided by my own interests and inclinations in finding a subject.

The process needs to include an objective and highly critical approach and to make good use of sketchbooks for experimentation, especially if using an unfamiliar medium.

The practical work should be accompanied by an artist statement of ~500 words which is, in effect, the proposal or plan. In other words, it guides the practical work, it is not a post hoc justification of it.

My proposal is to locate a number of stylistically different representations of seascapes and to copy each one using media and scales different from the originals, with a view to letting my own way of working inform the outcomes. I also plan to incorporate text from pieces of prose or poetry relevant to the era or style.

My first step, before searching for impactful images, will be to use digital painting software to begin generating a sense of orientation and palette and a feel for the different styles – gestural, linear, stylised – I might want to include. I have two favourite packages; Rebelle, a painting app, and Flamepainter which is much more obviously digital. These two combine well to make good and inventive images.

My plan then is to use a search engine to locate known works of art, to scroll through these for visual impact rather than artist name or reputation, and to select up to four that differ in style and preferably era. Once settled, I propose to work with these styles, exploring them for their different approaches to representing the sea and recognising the contrasts in approach to perspective, realism, and expression with a view to making a series of drawings after these styles to submit as one assignment piece.

I want to achieve through this method experience of copying established works which, after making copies of drawings in Aristides’ Beginning Drawing Atelier (2019), I think will help me begin to develop greater varieties of hand/arm movement, improved perception of ways of showing space and edges, and a better understanding of how to make marks to indicate or delineate, suggest or emphasise elements of an image. I also want to build on exercises using colour, gesture, and line while paying attention to the compositions set by the original artists and learning from them more about perspective, movement, and ways of placing elements in the three key areas of an image – foreground, middle ground, and back ground. I had enjoyed this element of the landscape component in which I had taken a series of concrete constructions comprising the complex arrangement of a flyover junction,  but I also want to incorporate more movement which, in this module, was primarily concerned with the human figure. I am not planning necessarily to feature any figurative work but to translate the movement element into the seas.

The feedback from Assignment 4 – the use of black, differences in blacks, and the idea of liminals (borders, boundaries and edges) has been sitting in my mind and, in reference to the sea, would seem to have relevance in terms of horizons, the lines of horizontal waves, the interactive element when water meets the shifting sands or the solidity of rocks.

How these factors materialise in the finished work and in what guise will depend on the representations of seascapes I find to inform it. 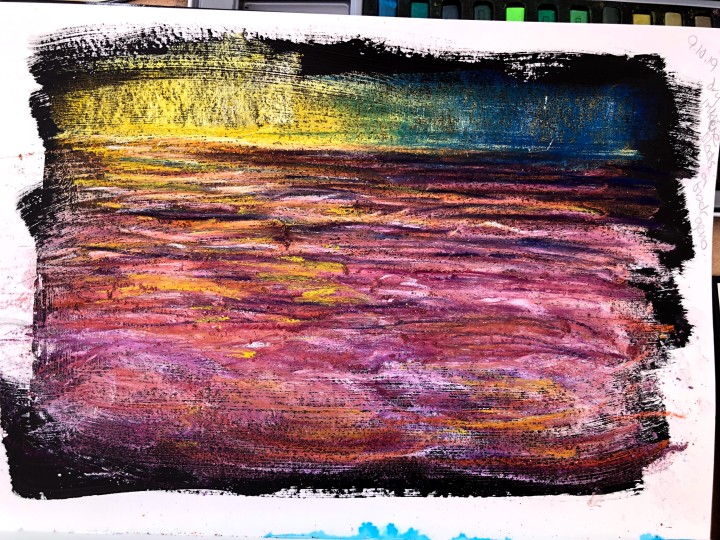 NB I may edit this post prior to submission, but will not do so subsequently.