Task: a portrait from memory or imagination.

Not so long ago I would have looked at this with joy and relief. Now, after struggling to make sense of what I see in front of me and realising the advantages that confers in terms of perspectives and all those unevennesses faces have, I’m glaring at the instruction with an expression somewhere between disbelief and horror. Someone I saw in passing? A person I used to know? A character from a book? Strange how that wipes every conceivable memory and drops my imagination through a trapdoor so that I can’t even remember what I’ve read.

That was half an hour ago and now I have it. A poet (Facebook) friend wrote about battling lack of self confidence and how her mentor reminded her that diamonds only reflect light, they don’t make any of their own – a comment on the perceived glossiness of others compared to her own ability to shine. The result was the poem From Crazy Diamond to Borrowed Light (Joslin, 2016). I made a painting based on this poem not long after I read it but the figure had no face. This time I hope to give her both the features and the light. For the record, it isn’t the author.

While I don’t want to simply replicate the painting from a different angle, I thought it might be worth starting with the palette to think about sketches and what kind/colour/texture of support will suit it best. I’m also keeping in mind that this is an exercise – a work designed to move me up a gear towards the assignment – and not an extensive study in itself.

Upside down in the sketchbook (hazard of lefthandedness), these are head shapes and colours overlayed with gesso deliberately blotted from the next page to avoid constructed marks and textures. Prismacolor pencils work well under and on top of gesso. I seem to be aiming for a rather passive, eyes-closed figure but do I want something a little more fierce?

This is not at all fierce and I’d drawn it before considering that idea. These are soft pastels on white gesso using gestural marks rather than lines. A little too pretty I think; even though it’s not aiming in any sense to be a likeness of the author, she is nothing if not feisty and so that should probably come through. 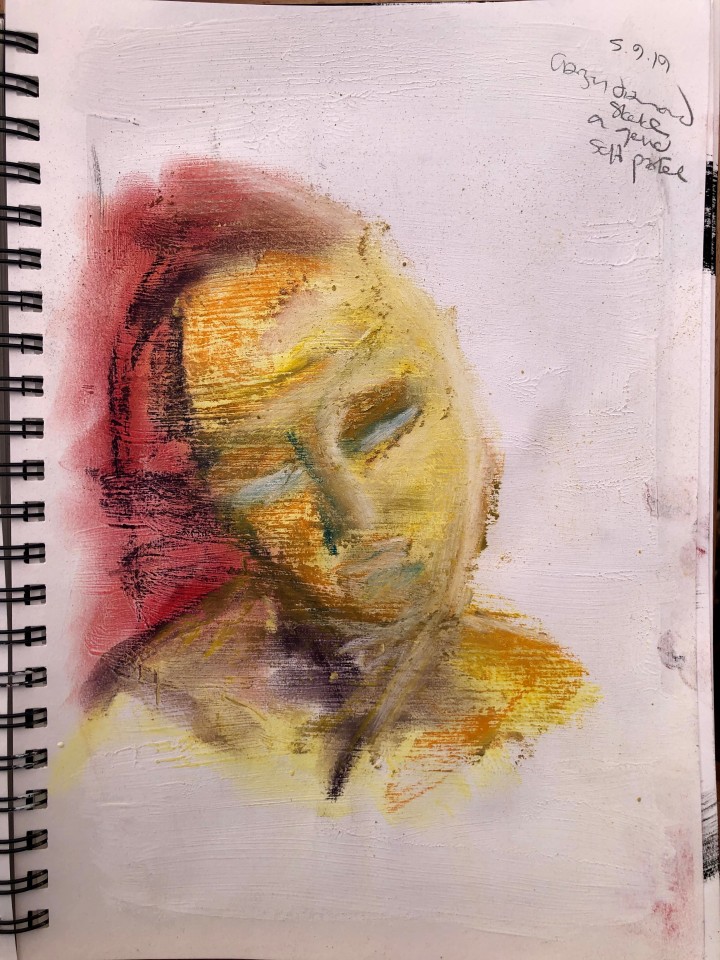 Oil crayon on blotted black gesso. Terrified wasn’t the expression I was aiming for! Oil crayons are a little bit immutable once in situ and so the white I was intending to add simply didn’t show up (oil crayon) or adhere (charcoal/conte). I liked the patchiness of the underlying gesso and it made its own shapes which suggested the way the drawing went, but I’d rather have something a little less of a feature in its own right.

The effects are interesting – Prismacolor, conte, and ink on black gesso. I’m wondering if I’ll need to resort to a reference photo for this semi-profile approach, and I’d rather not as this might detract from the image forming in my mind. Another question is how far this meets the requirements for drawing, given it’s more impressionistic than ‘realistic’. It’s my constant query – am I nearly drawing yet? 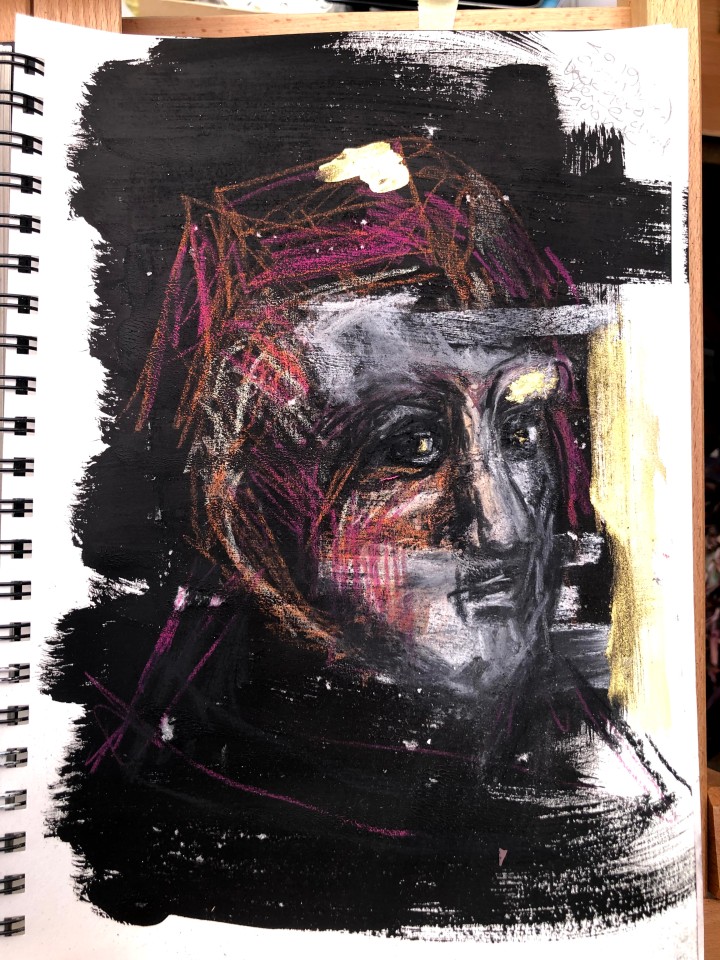 I think the next step is to move to a larger size where I can be more gestural. I like the knowing look on this last woman’s face and the dabs of gold ink (it’s actually bronze but it looks gold to me) hint, I think, at the emergence of light.

First stage: white gesso on selected parts of this A3 black cartridge to lift the light out of any colours I apply, and black gesso over most of the rest to provide body, resistance, and texture.

One thing I really have to learn is when to stop which means I may not have this right. I was actually tempted to stop at the pure gesso (above) but there are constraints to this as a task that I wouldn’t have were it for my own purposes so I’ve continued into layers of colour. Black, white, and coloured conte, some coloured charcoal, and a few dabs of gold ink. This face seems to me to be more defiant and assured, more deserving of the capacity to generate her own light, and I guess that’s what all of us on this course are ultimately aiming for.

Question: what is a portrait?

This question has come up before, I recall debating it with some people not at all impressed by the winner of Sky’s Portrait Artist of the Year because her final piece ‘looked nothing like her’ (Kim Catrall). At one time I would have agreed but now I am far less convinced of the need for direct mapping of features onto canvas via hands, eyes, and brain. There are cameras that can do that. So the question then is what should an artist bring to a portrait that a camera (and I’m factoring out artist photographers for now) could not?

Before cameras, artists were the recorders of visual evidence, often commissioned to paint portraits or landscapes that showed off the wealth of the paying customer. John Berger in his Ways of Seeing series talked about this – the need to demonstrate status via everything from a beautiful wife to a table full of meat dishes and burnished goblets. Had he made this series now, no doubt he would have drawn comparisons between these and today’s instagram and Facebook posts. I wondered at the time how often artists were pressured to produce flattering rather than ‘truthful’ paintings and what they did to accommodate this requirement. Today we would apply filters either in-camera or via image editing software. I manipulated the final drawing in my iPhone to alter it on a number of dimensions but how far are these deviations from the ‘real’ piece when vision and colour perception are emergent properties of neurological processes?

The question of realism seems obvious – if it looks like the person then it is real. The difficulty is that the person only really looked like that in that moment and quite often people fail to recognise people in reality from one static photograph. Eye witness evidence is often jeopardised because of differences in lighting, clothing or angle of view between the image of the perpetrator in their mind and the one in the police records.

Still, I think I know what ‘looking like’ means and that it differs from portraits that seek to bring out the essence of the person. But what does that mean? An energy? Their movement or the colours they exude as imagined by the artist?  A mood?

A subsequent Portrait Artist of the Year winner painted Tom Jones with considerable photographic accuracy while using quite a blocky approach to mark-making which requires distance to construct the image. The link I found refers to the ‘striking resemblance’, suggesting that this is a key and valuable attribute for a winner.

Ultimately, a ‘good’ portrait is probably one that meets your expectations as an observer or purchaser and pays little attention to any underlying drivers with regard to style or exposure of the sitter’s personality. If I want a snapshot of someone who matters to me, then a camera is probably the go-to device; if not, I might prefer an interpretation or impression of that person; one that reflects my sense of them and carries hints and glints of the fragments that remain consistent in the real world. If I’m honest though, I would not want to be looking at it a few years down the line and wondering who it was supposed to be, so I guess my ambivalence is showing. And as this discussion borders on the rabbit hole of what good art actually is and who decides, I will stop at this personal conclusion.