Instinctively this feels ok but as soon as I saw instructions that included rulers and viewers I was thrown because that just isn’t me. I’m realising that I’m more intuitive even though that often leads to wobbles and inaccuracies. I think though that I have a few techniques up my sleeve now to help compensate, one of them developed during an earlier exercise and that led to an interior drawing that I rather liked (I may re-purpose it for one of the perspective tasks). It involves using one of my own photos, reducing it to monochrome, increasing the contrast, and then drawing on it the outlines of the the various tonal shapes. This starts to teach my brain what the relationships are in the image and makes my arm/hand movements more fluid so that it becomes easier to apply the ‘feel’ of the image to another support. I haven’t done that yet with this image but that’s next up. 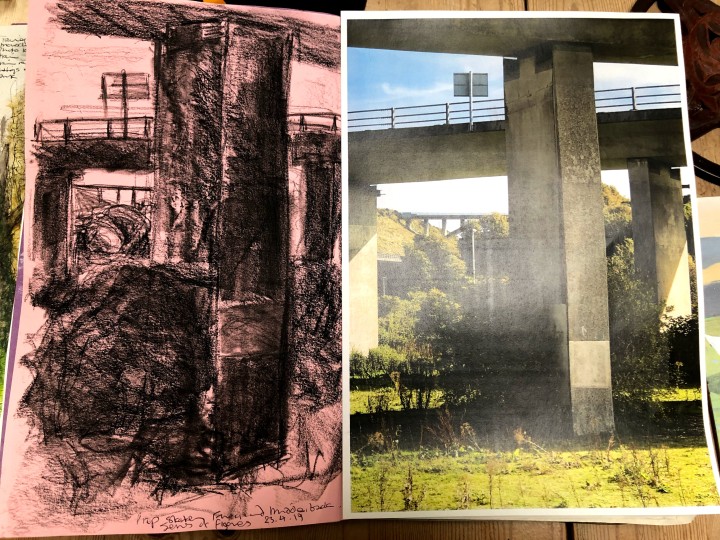 preparatory sketch in charcoal on A4 cartridge.

I took this photo sometime last year for no other reason than that of the layers of roadway going from the part I was standing under to the footbridge way over in the distance. It ain’t pretty; in fact it has something of the post-apocalypse about it, albeit a well-managed one.

24th April. I’ve marked out the edges now, trying to find the ‘swing’ of it. Looking at it, I’m wishing I could pass it off as an actual product! 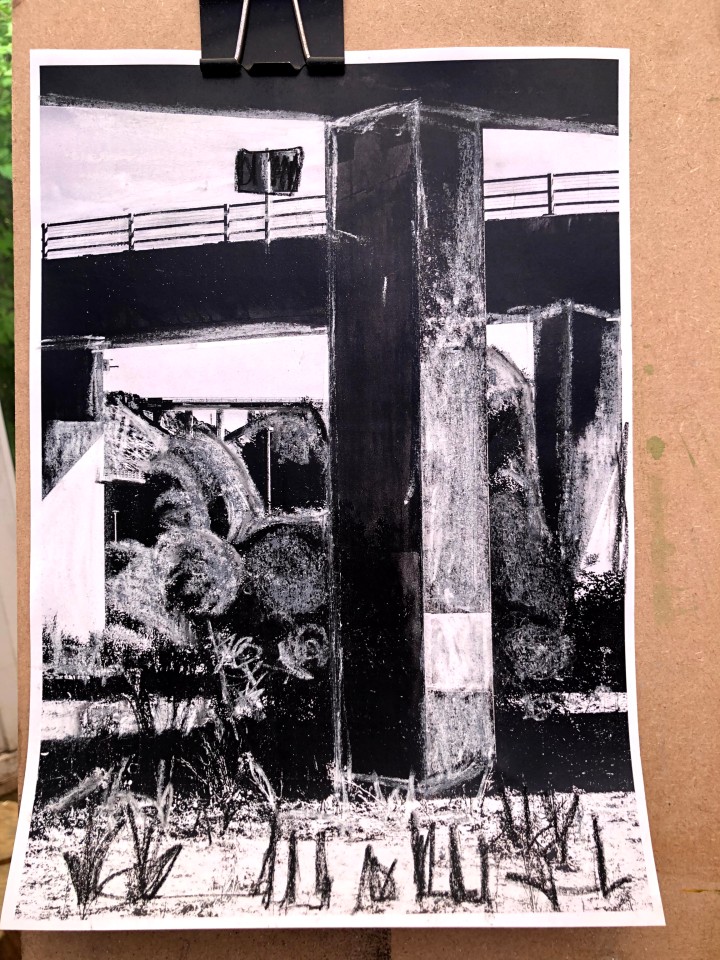 I’ve used white charcoal and black conte to exaggerate the contrast and focus on the shapes.

This is a gesso-prepped sketchbook page that I’d also covered in a layer of glass fibre mesh tape. The purpose of this stuff is to hold plaster or other semi solid substance until it sets but an artist friend uses it to paint tiny windows in distant buildings. I wanted to use it for the texture and its building materials feel. This first sketch is quite rough and I discovered that, yes, I needed to deploy a ruler. 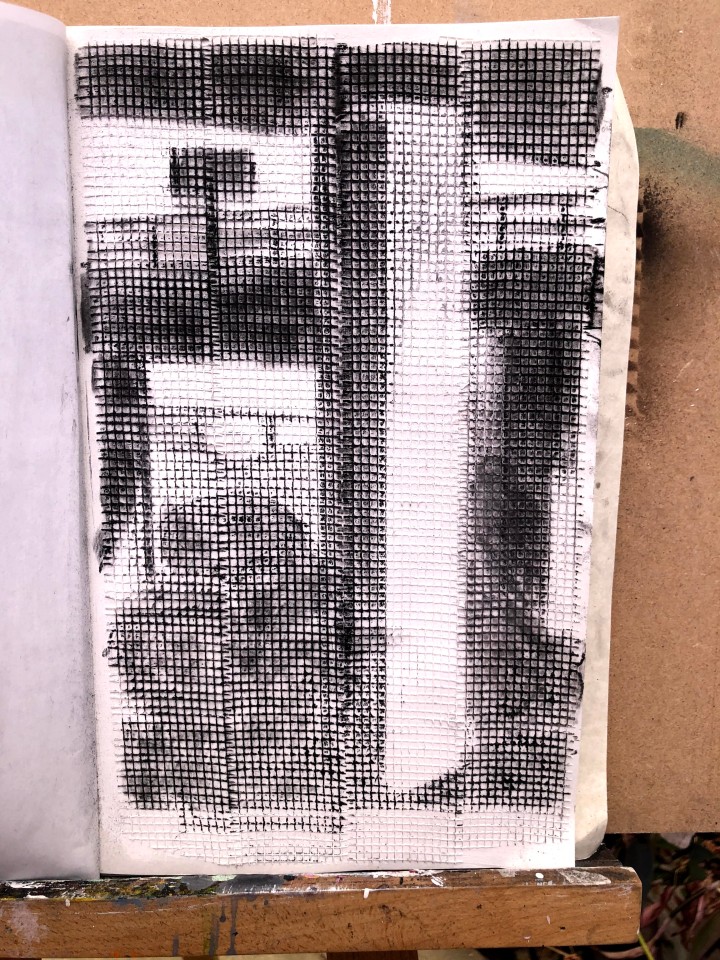 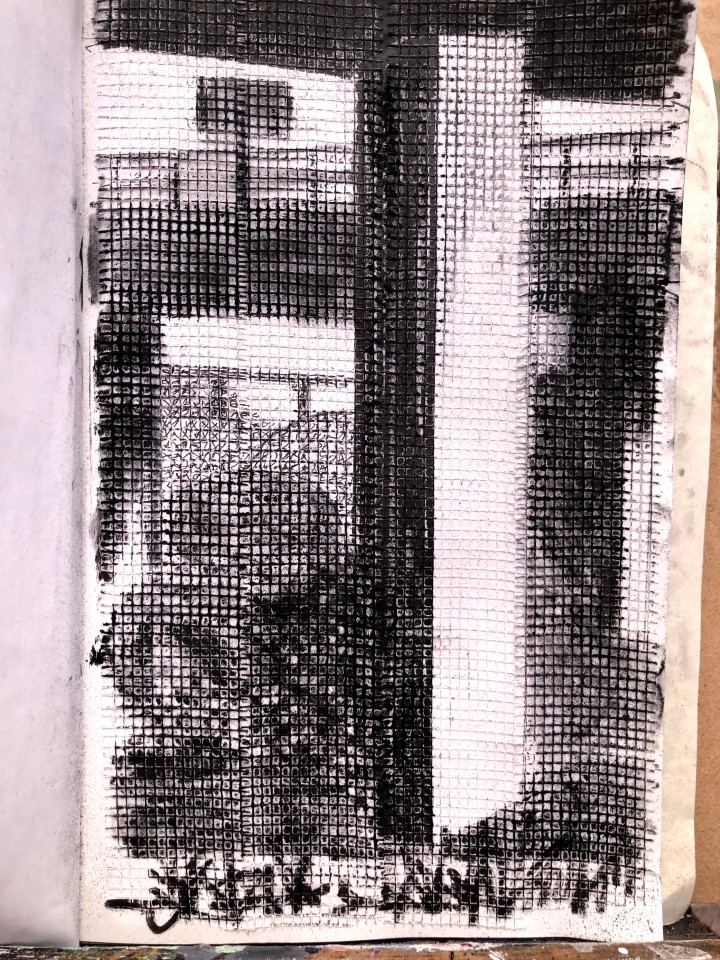 In this second image, I’ve bolstered the charcoal/conte of the first layer with black oil crayon and blended some of the receding detail using a stump. Then I’ve picked out a bit of light distance detail with a fineliner pen, emphasised the foreground dark tones with a fineliner brush, and represented the scrubby foliage with thick fineliner in such a way as to evoke graffiti. I could probably do more with this but I’m going to resist and try a different approach.

27th April. Just to move away from the stark monochrome of concrete struts, this is the underside of Brighton Pier (my own photo). Again, I reduced the saturation for one print to help me find the shapes, but also printed the coloured version as a guide to the palette for the sketch – then  ignored it. 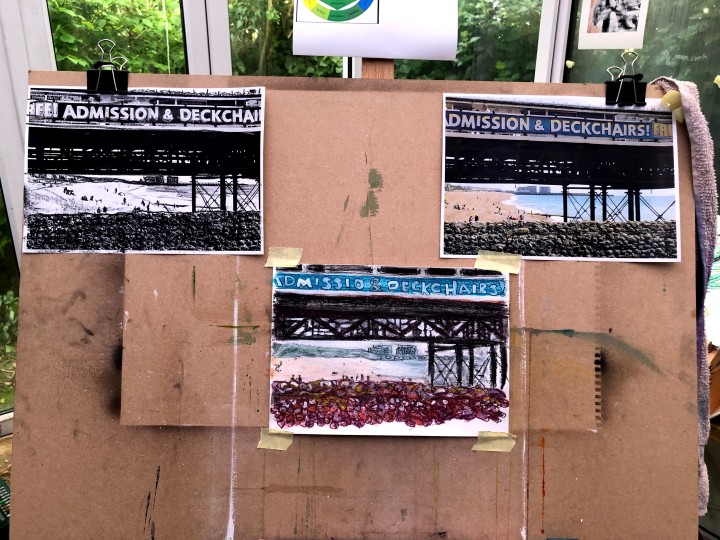 I’ve used Inktense blocks, fineliner for detail, and white ink for the lettering and highlights. Brighton pier is the comic sans of the town (it’s hard to think of it as a city), and the lettering on the side is slightly skew-whiff to indicate its zaniness. Underneath is the brown metallic support structure, and in the foreground, the more modern cement and pebble wall that edges the groyne going out into the sea. The marina is in the distance – a symbol of wealth in a place that used to be the nude bathing beach. 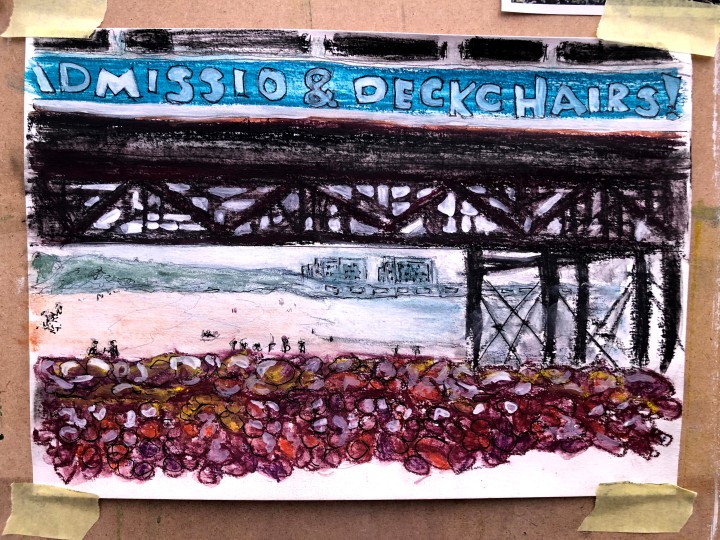 I might just detail this a little more tomorrow. Bring up the white, accentuate the cartoonish nature of it in keeping with the seaside postcard tradition and also some of the rather wicked cartoons of the Prince Regent whose excesses here were well documented. Dubious as his lifestyle was, Brighton wouldn’t be what it is had he not brought his Court here. 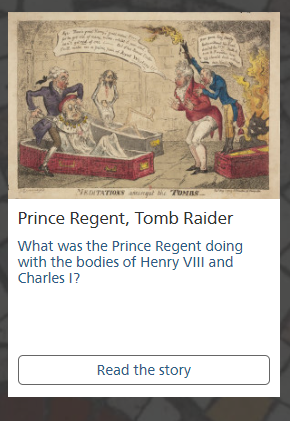 This one is from the Brighton museums site, https://brightonmuseums.org.uk/discover/tag/postcards/ accessed 28/04/19, and while my drawing is clearly not in the same leery vein or even the same saturation of colour, these cartoons were in my mind as I made it.

I’ve decided to leave it here and move on, slightly faded suits the pier quite well.