I’ve been a little more canny this time about how I’ve pushed and pulled the paper when priming it with transparent gesso and adding new pieces to seal holes or add bulk. I’ve added a basic layer of different colours from the same palette as before, and added some crimson in a wash mixed with pumice medium which I poured onto the surface when it was angled almost flat. The original is quite surreal in itself and this already looks like a rip in time.

At the moment I’m debating using just one keyhole instead of staying with the original, but I have an idea to replace the path where the figures are standing, with the key.

11th July. This is an amalgamation of the palette from the original painting (and my version of it) and the one for this series, and now i have the one keyhole in place, standing on the key which is seen in perspective, I’m feeling less inclined to add another, partly for compositional reasons but also because locks can only be opened by one key at a time. This resonates with the current crisis in that, while drugs to alleviate severe damage to the alarmingly extensive range of tissues this virus can affect are beginning to show promise, the only real freedom is a vaccine. The other alarm I have as I look at this is that it’s beginning to resemble a stretched animal skin.

From a painting perspective, I’m intrigued by the little aggregations of wash around grains of pumice medium that I’d also applied as a wash. This is everywhere and it adds a real grainy texture to the whole. My next step is to tone down some of the midground areas with another mixed wash, and bring up the key slightly. This lock and key do not belong together which I hope doesn’t extend to my earlier metaphor.

A question asked by the course materials is in regard to influences and as usual I’m at a loss beyond unknowing syntheses of various approaches. Clearly, with this painting in particular I’m drawing on Friedrich’s palette and composition but not his style which is very smooth, blended, and seamless. My extension of this idea is shaped by the materials and for those I’m looking to abstract expressionism which seemed to incorporate all manner of items in the work but was, as titled, abstract whereas this is not. I wonder if some of the ideas are subtle intrusions of textiles and fabrics, and can I trace that to The Great British Sewing Bee, a very unlikely (for me – I’d rather staple a hem than stitch it) feel-good piece of TV which, along with The Repair Shop, has been an oasis of niceness and artisan skill during these anxious times. Another possibility is Stephen McGowan, an actor and artist I follow on Instagram whose work is quite sculptural and also involves fabrics and elements of design. I think I can also see elements of Bisa Butler here too – again an artist whose expression is in fabric (quilts) and who uses powerful colours to make shapes and patterns.

Mid-ground muted now with a sap green/ultramarine/lamp black wash. I’ve also made a platform of the key and trailed a highlight along the shaft to the end that goes in the hand. This one is old and quite ornate with three loops of metal giving it a Celtic appearance. 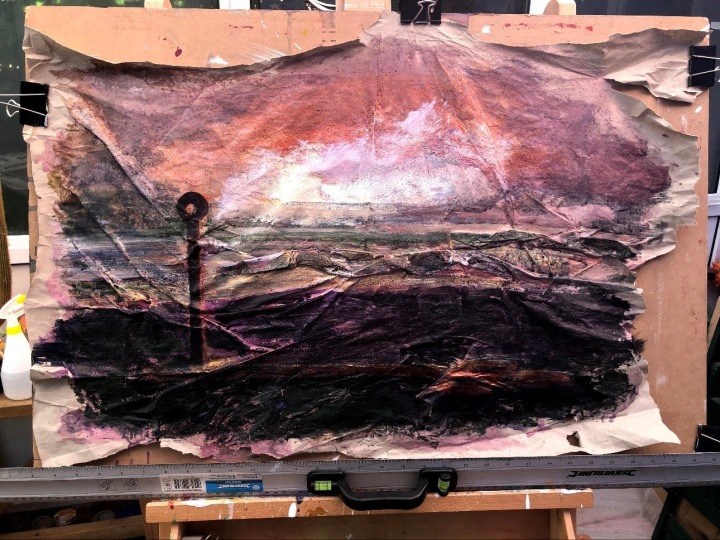 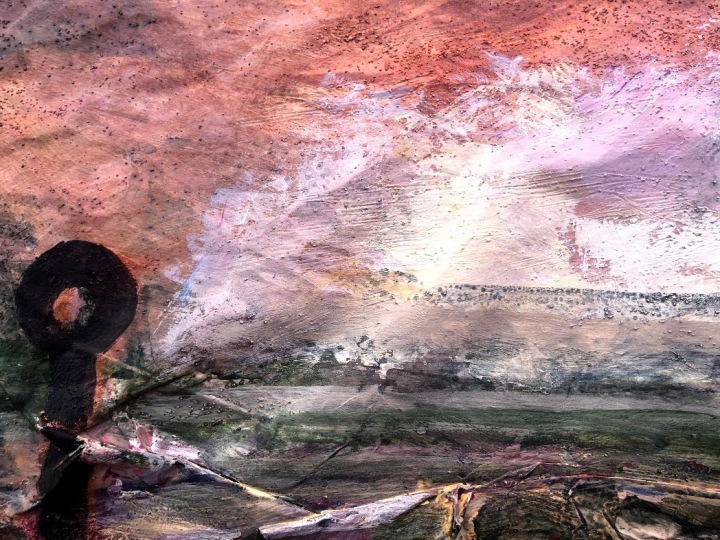 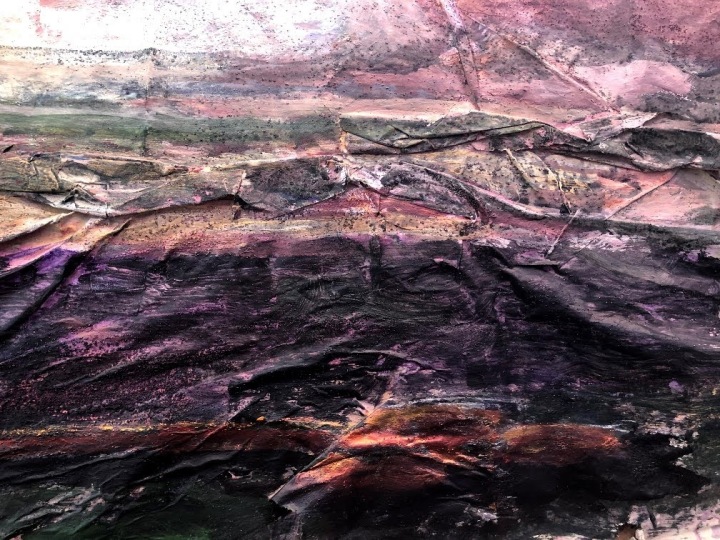 Background erased in Paintshop Pro. I’m wondering how to leave an edge to these crops so that they’re not floating in space.

3 thoughts on “Part 5, second in the series of themed paintings – One keyhole at sunset”