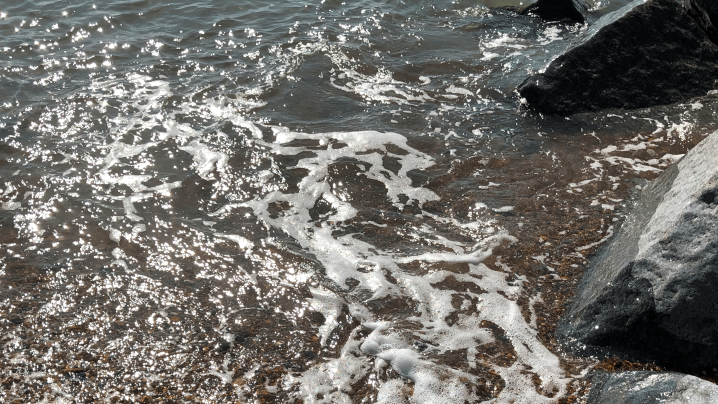 I love the sea and it also terrifies me. It moves with grace, it crushes and extinguishes life and it sustains other life. There is more of it than there is land. It makes our planet the precious blue dot of our solar system, and we are killing it.

There have been no seascape projects or exercises in this section and I am missing the crashing blue green power of oceans.  Three very different pieces of sea art are in my mind: The Great Wave off Kanagawa by Japanese artist Hokusai (~1829/1833) for its frozen woodblock precision, Maggi Hambling’s Bold Breaking Waves series (~2012) for being powerful sweeps of tumbling green and blue energy and nothing like Hokusai, and almost anything by Turner although I’ll probably go for Fishermen upon a Lee-Shore in Squally Weather (1802) because of its illustration of majestic destructiveness.

At this stage, I have no intention of producing a deep, meaningful commentary on environmentalism, just an illustration of what the sea and the cosmic influences of traction and gravity mean to me, but who knows, this is the first post.

This sketch is an interpretation of the photo above. Inks, charcoal, conte on white gesso. I’ve formalised the swirls end eddies around the rocks that jut out into the water and that were put there to minimise erosion of the beach. They glitter. A little further up I found a long piece of bright green rope which I thought to pick up and take home, but when I pulled on it, it was firmly attached to something under the pebbles. What though? The mythical plug that empties the ocean? 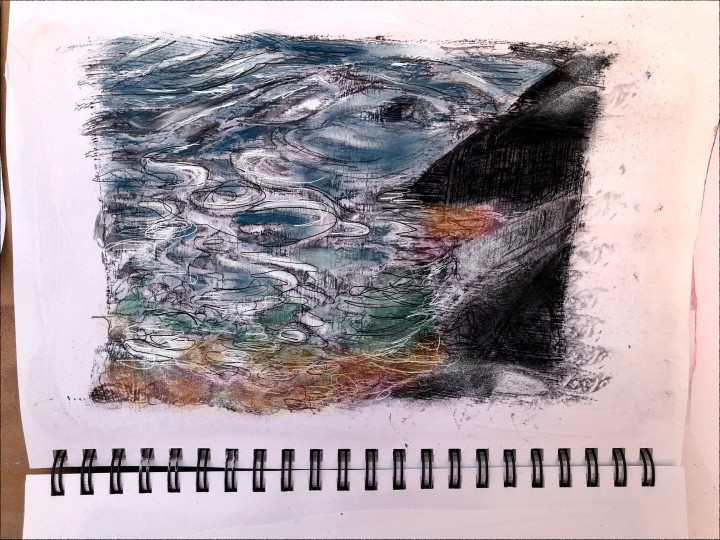 Below are little experimental windows on water that I’ve allowed to leak across into each other. Top left is gold and silver ink on white gesso, made with the idea of reflections – sun during the day and the moon at night. Top right is gold acrylic, and gold and silver ink with blue and green ink dribbled from the top to make trails of the colours. The inks don’t show up on the gesso, only around the edge. I like the way the trails suggest water and the way we often see fish as distortions of themselves through the ripples and eddies. I think that’s worth keeping in mind.

Bottom left is blue ink allowed to run with the help of added water and deliberately tilted to spread over to the right. I’ve detailed with black conte and added streaks of white ink. I was going for a more stylised effect with this window. At bottom right I was looking at ways of allowing flashes of gold to come through the dark of deep water. I’d almost-dry-brushed black gesso onto the page and then streaked gold ink into the white spaces but in the end I think the effect was lost and nothing very exciting emerged.

My thinking is going towards comparisons of very formalised representations of seas, some of them influenced by mythologies, the photorealism of the likes of Vija Celmins, the painterly approaches of Turner, and the organised chaos of Hambling’s wild expressions. Meanwhile, I’m using some digital programmes to experiment with colour, style, and ideas.

This is an attempt to mimic, with no real clue as to how, a technique I saw in a video by  Andre Desjardins who threw graphite on to a huge canvas and then, rubbing, reducting, spraying, and detailing, made an image from the structure. Mine just went shiny. I added some willow charcoal then used a battery eraser to help pull out some of the shapes left by the pooled puddles of water I’d sprayed on it. Quite atmospheric but I’m not convinced at the moment that graphite is my thing.

On an entirely different level, I found a cache of old nail varnish. I’d forgotten how evil this stuff is with its vapour but I might tolerate it for the metallic effects.

Building on one of the digital images, this is inktense block on black gesso. Rather stereotypical sea/sunset composition but I’m attracted to the colours and the textures appeal. I’ve left the medium dry rather than adding water, but I should try that elsewhere. There’s a look of stitched fabric about this I think.  I’m still working on waves, especially breaking ones.

Top: soft pastel blend on black gesso with juxtaposed leviathan and ship. A tad twee but an exercise in ecological perspective.

Bottom: bird seed glued onto a gesso base then dabbed with blue, green and silver nail varnish, sprinkled with eco-glitter, and streaked with silver ink. Experiment in texture with shoals of fish in mind, then morphed into the idea of timelapse. Maybe!

I’m not sure which way to take this because although I’m drawn to the idea of an ecological statement, I would really just like to make something that says ‘sea’ in a way that shows the movement, reflection, depth, colour and life that most people would recognise, and does it in an aesthetic and reasonably skillful manner. Simple seas.

I tried to keep to pencil with this one, aiming for a more stylised effect, but pastels drew me in again., first for the dark shapes under the rising waves, and then for the blurred froth of the falling ones. It has an odd perspective but then the original idea had been stylised rather than representational. Also, there’s a definite feeling that Brighton seas are somehow higher than the land. I think my shapes are improving a little.

Yesterday I applied some dilute transparent gesso in a kind of frothy pattern. By today it had mostly flattened out although there was still some resistance to the surface. I was aiming here for a more rolling sea from a lower perspective, using dry inktense blocks blended and then detailed with Hambling-esque tangles of white for dynamism. I still have problems with the shape of waves when they’re lifted up.