I have found a way to do this, a compromise between my sense of exploitation when using (and it’s that word) the bodies of others for my own purpose and making do with static figures in photographs caught in movement.  Photos, while useful for copying and examining detail, are 2D in all senses; flat so that no real cognitive work has to be done to reflect their 2D-ness in the sketch, and also in that they lack life. I’ve chosen two (for now) live webcam streams in which one group certainly knows it’s under the public eye and the other probably should. The first is the NASA JPL laboratory where teams of people in white coveralls and masks are building the 2020 Mars lander, and the second is the Abbey Road zebra crossing where traffic is periodically halted by groups replicating the 1969 Beatles Abbey Road album cover.

Quick sketches of three people engaged in slightly different activities. I was tempted to add some context but only got as far as the back shelf because I was drawing people out of their immediate locations. There’s a blue light on that shelf which, when lit and rotating, indicates power to the lander is on. Everyone has a black cord slung over their shoulders and clipped to them at one end. They clip the other end to the lander to ground themselves before touching it. When this thing leaves, it’s going to feel like family!

Charcoal pencil; I like this because of its freedom from the temptation to try too hard for detail. Line is the most I can expect from moving targets.

All manner of step ladders and overhead lifting devices appear from time to time and sometimes there is a lot of standing and looking.

Fineliner and wash with some charcoal pencil detailing. I find these rather too line-driven although I think they improve towards the left, which was the last one I drew on this page.

I went for negative space here, trying to avoid harsh outlines. The Fineliner brush doesn’t seem to work too well with water. Again, right to left = not great to better.

Red pastel + water. I’m not sure why I chose red except that it’s so different from the white and blue of the actual scene and I wanted to see if it made a difference to my gestural marks. Maybe I was expecting to be a little more flamenco and maybe the one on the far right cooperated. The person on the left spent quite a lot of time crouched like this, looking at a small item on the floor, and the one in the centre has what I’m beginning to recognise as a classic pose – there are no pockets so they’re deprived of the most popular place to park their hands while they aren’t doing or pointing.

There was something of a meeting yesterday, luckily for me they stayed relatively still. Interesting to see how so many stood with their hands behind their backs in a military ‘at ease’ style.

Today I remembered I had an artist’s wooden model that could adopt a limited number of poses which might help address the requirements for quick sketches that include a centre of gravity line. I’ve used biro and adopted Moore’s ‘scribble’ approach to lines which helps me avoid trying to pin things down with an outline and so assists with the whole in terms of posture, life (even with a piece of wood), and proportions. 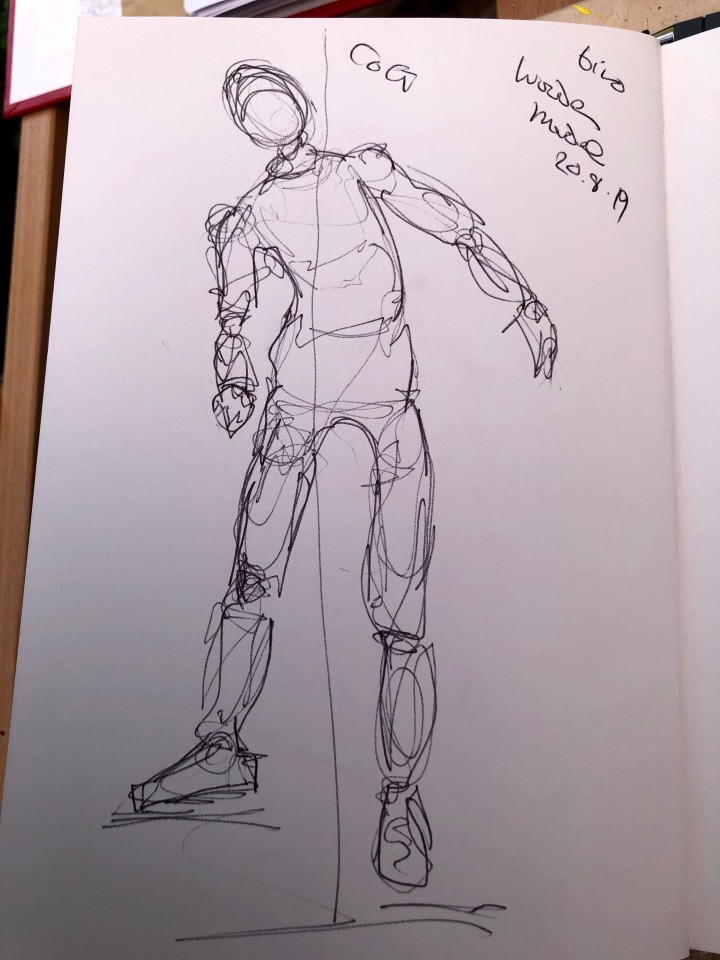 The doll isn’t hugely flexible but I’m finding it’s good enough to begin training my eye to register proportionality and to make real shapes out of the basic structure. These take just a couple of minutes and that eliminates unnecessary elaboration. I suspect it may generalise to pulling out that structure from a live model, or making one where only a photo is available.