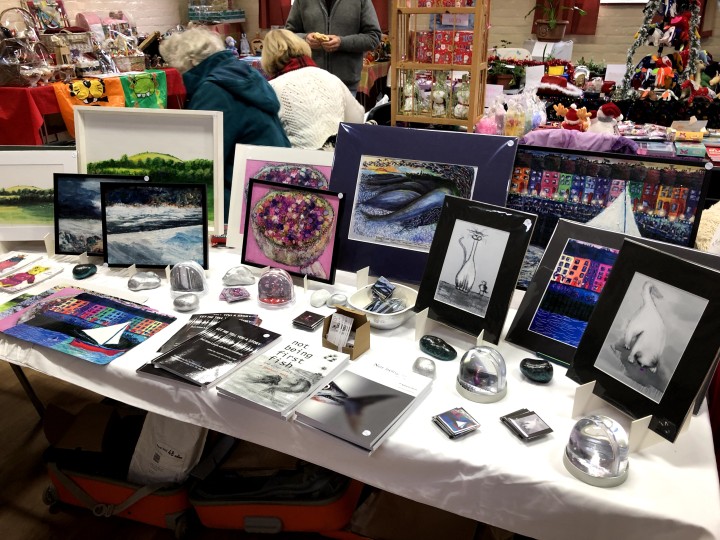 Up till now, I’ve only ever cruised round our village hall craft fairs, nodding at stall-holders and measuring their gaze in terms of potential engagement. If I look too long, will they think I want to buy and start demonstrating the quality of something I’m not interested in? Maybe they’re bored and fancy a natter? Sometimes they’re neighbours so there’s that unspoken contract whereby the value of our conversation will plummet should a punter with cash show up and appear interested in making a purchase. This year I was that stall holder; balancing the welcoming beam against the desperate appeal for custom. How hungry does this grin look? Did I really just switch my smile off the minute that woman moved away? I hate that!

It wasn’t quite my first gig, I’d actually been invited in the summer at very short notice to fill a gap at another village fair. The friend of the friend who asked me was the organiser and found herself with a couple of unclaimed tables. I had almost nothing but I took it, including a couple of my books, in a cardboard box. Sold no art work but shifted two books, go figure.

This time I had four boxes, all labelled with a marker pen, their contents organised and packed with paper to prevent damage, and the car boot cleared to contain them. Then it rained. Suddenly the logistics changed – how to lug this lot into the village hall without suffering collapse due to soggy bottoms? I spotted my nesting suitcases, redundant due to no longer travelling to conferences or traipsing up the motorway to visit elderly parents now moved on, as it were. I had half an hour to transfer everything, assuming it would fit. It did but oh my the weight of those things!

So what happened? I beamed, I glanced, I curtailed conversations with the friend who’d come to help (and goodness me was I grateful for that) whenever an interested-looking party hove into view, I played peekaboo with kids over the top of the art work, and I sold six cat cards and a cheap book. It covered the cost of the table and half a sandwich which is better than a slap in the face with a wet fish – and those sandwiches were gooooood). Friend and I then re-packed the suitcases and lugged the lot back to the car. I owe her, although admittedly the offer of a drive in my new electric car with its hands-off warp button that allows it to steer itself might not feel like much of a reward, at least till I’ve demonstrably got the hang of it by not driving into a motorway flyover pillar.

I think I need now to consider another way of shifting my work. Craft fairs are very social and that’s nice, but there is a physical cost which, with the various limitations I need to take into account, might be a little too much. So, short of achieving fame over night and acquiring a flotilla of helpers, online would seem to be a better bet. Etsy maybe? My own website? This site? What about postage, packing, handling returns (preferably without yelling at people who ‘thought it was blue but it’s actually only blue-ish’)? If anyone has any advice, I’m all ears and inbox. Meanwhile, here’s my best seller: 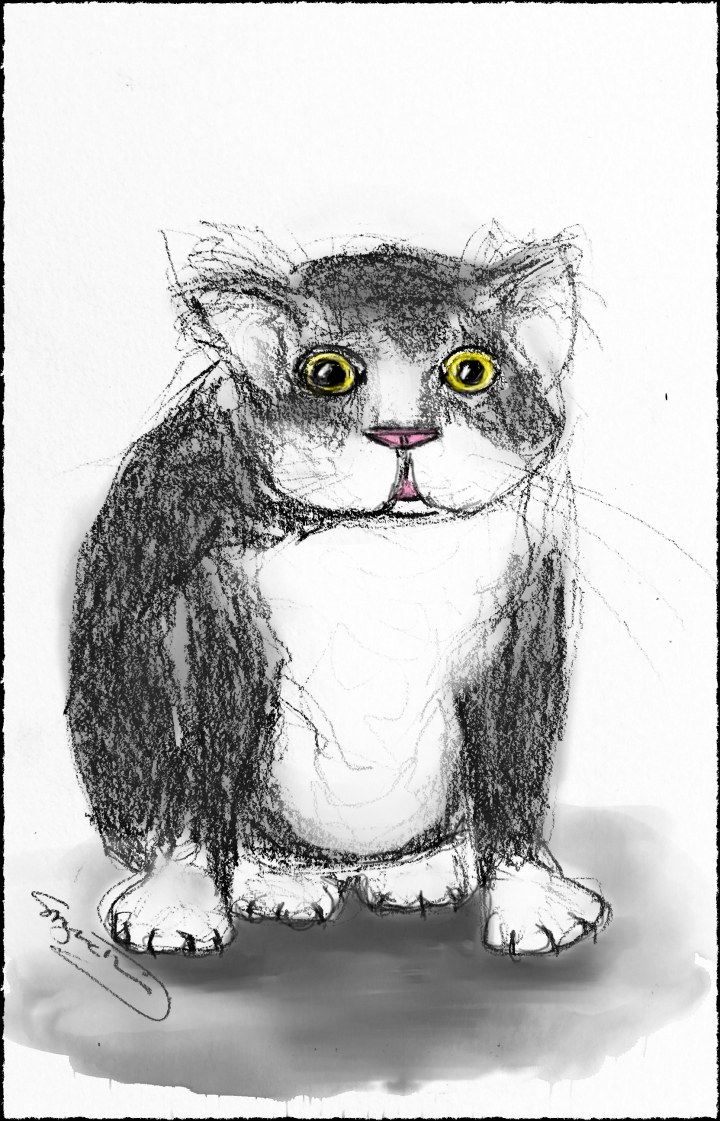 Mr Woods was, until recently, my keyboard camper. From about 2.30 in the afternoon, he’d be sitting there with that face telling me it was tea time. It wasn’t and he’d shift closer till eventually he had the keyboard locked down with his bum and the screen obscured with the rest of him. I usually gave in by about four. This is a charcoal sketch imported into Rebelle by Escapemotions for a little paint work.